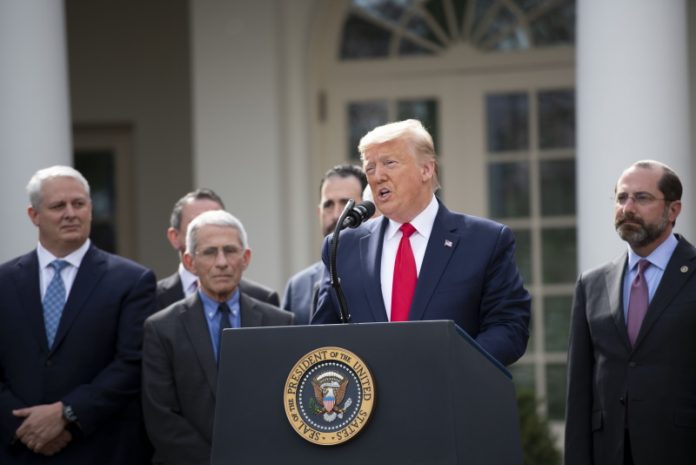 US President Donald Trump has vowed to deploy “thousands and thousands of heavily armed soldiers” to stop the unrest in the capital and other cities if local administrations refuse to take the action against demonstrators who were protesting over the death of African-American man, George Floyd.

Speaking to the media on Monday at the White House, Trump said “I am your President of law and order and an ally of all peaceful protests”, but was “taking immediate presidential action to stop the violence and restore security and safety in America” because the country needed “cooperation not contempt, security not anarchy, healing not hatred, justice not chaos”, reports Efe news.

“I am mobilizing all available, federal resources, civilian and military, to stop the rioting and looting to end the destruction and arson and to protect the rights of law-abiding Americans,” he said.

His remarks came as some 40 cities across the US, including Washington D.C., have imposed curfews to curb acts of violence in extensive demonstrations against police brutality and racism.

Floyd, an unarmed 46-year-old man, died in Minneapolis on May 25 after Derek Chauvin, a white police officer, held him down with a knee on his neck though he repeatedly pleaded, “I can’t breathe”, and “please, I can’t breathe”.

All four police officers involved in the incident have been fired, and Chauvin has been charged with third-degree murder and manslaughter.

Speaking at the White House, Trump said that Floyd’s memory must not be “drowned out by an angry mob” and added that “strongly recommended” to every Governor to deploy the national guard in sufficient numbers to dominate the streets until the violence has been quelled.

“If a city or state refuses to take the actions that are necessary to defend the life and property of their residents, then I will deploy the US military and quickly solve the problem for them,” he said.

The head of the National Guard Office, General Joseph Lengyel, tweeted on Monday that “17,015 National Guard Soldiers and Airmen are assisting local and state civilian agencies responding to civil unrest”.

Calling the violence in Washington D.C. on Sunday night “a total disgrace”, Trump said he was “dispatching thousands and thousands of heavily armed soldiers, military personnel, and law enforcement offices to stop the rioting, looting, vandalism assaults and the wanton destruction of property”.

He said the government was putting everybody on warning that seven o’clock curfew will be strictly enforced.

He vowed to arrest and prosecute those “who threatened innocent life and property”.

“I want the organisers of this terror to be on notice that you will face severe criminal penalties and lengthy sentences in jail.”

At the end of his speech, Trump said he would go to “pay my respects to a very, very special place”.

Surrounded by dozens of security personnel, he then walked out of the White House across Lafayette Square to St. John’s Episcopal Church that was damaged in fire amid protests on Sunday.

Trump posed for the cameras with a Bible in his hand in front of the windows of the church, whose basement caught fire, although no major damage was done.