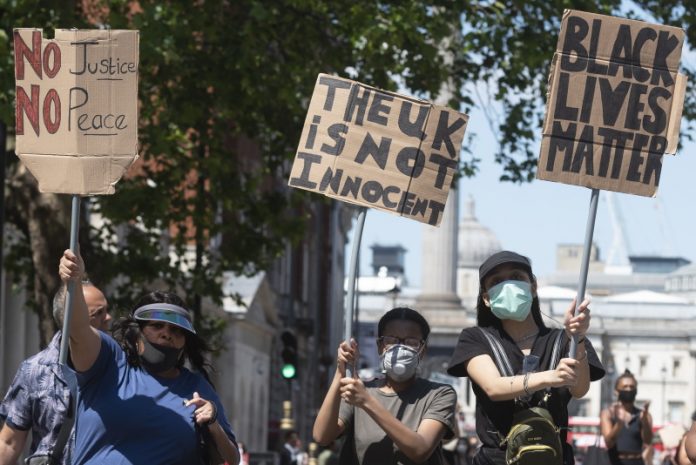 Thousands of people gathered in central London’s Hyde Park to show their solidarity against the death George Floyd, an unarmed African-American man suffocated to death by a white police officer in the US state of Minnesota on May 25.

Organized by the campaign group “Black Lives Matter”, the protest started at around 1 p.m. on Wednesday, with demonstrators chanting “no justice, no peace”, “Black Lives Matter” and “silence is violence” before marching towards the Parliament Square, reports Xinhua news agency.

Star Wars actor John Boyega made an emotional speech to protesters, in which he said the crowds were “a physical representation of our support” for Floyd.

“I need you to understand how painful it is to be reminded every day that your race means nothing and that isn’t the case any more. That was never the case,” he said.

Amid the COVID-19 pandemic, organisers asked demonstrators to keep two-meter distance during the event and were seen handing out gloves.

The London protest followed days of massive protests against racial discrimination and police abuse across the US.

The 46-year-old Floyd died after a white police officer knelt on his neck for almost nine minutes until he stopped breathing.

In a video footage, he was heard saying “I can’t breathe” while three other police officers stood by.

On May 31, despite the ban of mass gatherings, thousands of people gathered in London and Manchester.

On Tuesday evening, civic buildings in cities including London, Liverpool and Cardiff were lit up in purple in memory of Floyd.