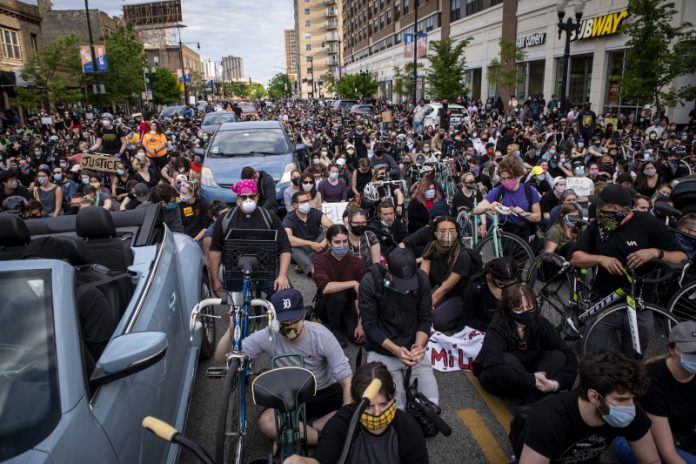 An estimated 20,000 protesters participated in the “Chicago March of Justice” to demand justice for George Floyd, the unarmed African-American who died in police custody on May 25 in Minneapolis.

On Saturday, the protesters, holding signs and stretching about seven blocks, gathered in a park west of Chicago to voice their demand.

They listened to activists, poets and others, demanding police accountability and the dismantling of systemic racism.

They also asked for the immediate release of all protesters in custody, as well as criminal prosecution of all police who abuse demonstrators.

Police lined the protest route as protesters marched to a stretch of the Lake Shore Drive, which has been shut down to facilitate the protest.

When the marcher passed the overpass of expressways, vehicles on the road honked to show their support.

The whole process of the protest and march was peaceful.

Police said that there were no arrests or disturbances.

To prevent a repeat of last weekend’s chaos and looting, Chicago is paying up to $1.2 million to three private security firms to supply more than 100 private security guards to protect local retail shops, grocery stores and pharmacies.

Meanwhile, the city will continue enforcing the 9 p.m. curfew.

All access to the downtown area, including expressway ramps, has been blocked by snowploughing trucks; nine bridges over the Chicago River in downtown Chicago have been lifted up to halt the traffic between the northern and southern downtown areas; police has been deployed at almost every major intersections, mingled with Illinois National Guard members in some places; and SWAT soldiers were inquiring people who wanted to enter.

Here's why Eating Yogurt is Good for Your Heart