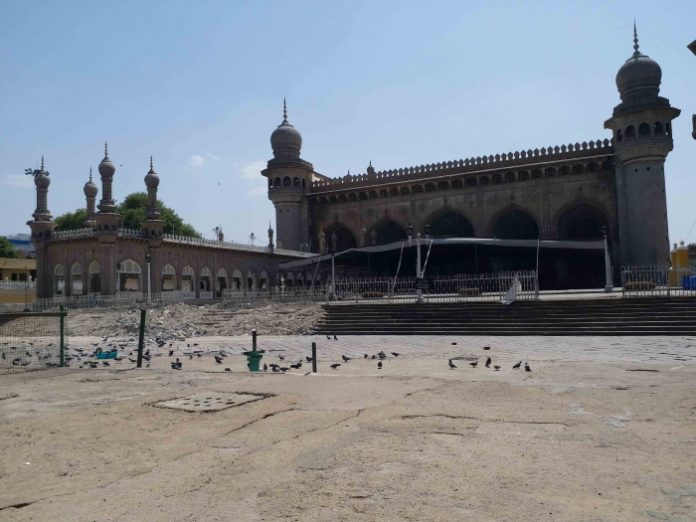 The worshippers will not stand shoulder-to-shoulder in mosques when they reopen along with other places of worship after two-and-half months on Monday.

Managing committees and caretakers of mosques are busy making arrangements to meet the new requirements of social distancing to check the spread of COVID-19.

Carpets are being removed in many mosques in view of the findings that virus survives longer on the coverings. People are being told to come to the mosques with their own ‘janamaz’ or individual mats or offer prayers on the stone floor.

As precautionary measure mosques will also keep the toilets and ‘wazu khanas’ or ablution rooms shut. People have been told to come prepared from their homes.

As standing shoulder-to-shoulder for congregational prayers is considered must, there was uncertainty on how the social distancing will be maintained. However, Islamic scholars have issued ‘fatwa’ or edict that the gap between two worshippers can be maintained to contain the spread of disease.

As the mosques re-opened in countries like Saudi Arabia and Turkey with social distancing norms, the management committees of mosques in India too decided to avoid shoulder-to-shoulder rows.

Mufti Mohammed Azeemuddin of Jamia Nizamia, in his ‘fatwa’ said while standing shoulder-to-shoulder is ‘sunnah’ or the practice of Prophet Mohammed, there is scope for maintaining distance between two worshippers till the end of the pandemic.

The mufti also gave the jurisprudential opinion that one can wear the face mask while offering namaz. “Covering nose and mouth during namaz is ‘Makrooh-e-Tehrimi’ (impressible) but one can wear the mask as a precautionary measure provided the nose and forehead are placed firmly on the ground,” he said.

The religious scholar also gave the ‘fatwa’ that there is nothing wrong in using the santisers before offering namaz provided its contents are not ‘haram’ (forbidden) or ‘najis’ (unclean).

The mosque committees have also appealed to people above the age of 60 to offer prayers at home. All India Majlis-e-Ittehadul Muslimeen (AIMIM) chief and Hyderabad MP Asaduddin Owaisi said senior citizens and those with co-morbidities should avoid coming to mosques at least till the end of June.

Congregational prayers in mosques were banned since the lockdown came into effect on March 23. However, ‘imam’, ‘muezzin’ and couple of other people have been offering five time prayers in every mosque.

The government of Telangana has announced that the places of worship can re-open from Monday subject to Standard Operating Procedures (SOPs) prescribed from time to time.

Meanwhile, the minorities welfare department has not yet come out with the guidelines for the mosques for congregational prayers. Officials said the decision to re-open the historic Mecca Masjid and Shahi Masjid for public would be taken after receiving the guidelines.

The two historic and biggest mosques in Hyderabad are maintained by the minorities welfare department.