It was a new experience for the devotees on Tuesday morning who came to temples and churches, as they were subjected to thermal screening, washing of hands and were asked to register their names before they enter the places of worship.

Masks have now become the order of the day in Kerala, the moment one steps out of their homes even if for a while now.

At the famed Sree Krishna temple at Guruvayoor, devotees after the screening were asked to stand in circles marked on the ground in accordance with the social distancing norms and moved forward circle by circle to pray before their favourite deity, which was closed for over two months.

“I am very happy to stand in the queue, waiting for my turn to pray. Things have changed and all have to be self disciplined to the new world order. It’s very good that this temple has opened,” said a devotee.

At this temple one has to book their ‘darshan’ and arrive at the temple accordingly. For Tuesday, ‘darshan’ is allowed for around 300 devotees.

Meanwhile, all the temples under the Travancore, Cochin and Malabar Devasoms have opened.

President of the Travancore Devasom Board, N. Vasu said they have abided by the guidelines of the Centre with regards to places of worship that came out on May 30.

“All our temples (1,248) have opened and there is nothing left to chance as all the 26 directions of the Centre are being strictly followed. Sabarimala temple will open (on June 14th till June 19th ) and there also the entry is through a virtual queue. Under the new norms, actually, temples will be incurring a loss and not make any money as lots of expenses will be there,” said Vasu.

In a Kochi church that opened and held its mass, there were just 80 devotees and the new norms was observed and all those who entered the church was screened.

“It was a good experience to be back at our church. All those who were attending the mass followed the new norms. Felt a lot happy to be back,” said two lady devotees.

Churches like the Mar Thoma Church, the various dioceses of the Syro Malabar Catholic Church and the Latin dioceses have decided to wait till June 30 for opening, while the Kottayam based Syrian Orthodox Church will make its decision on Tuesday.

With regards to the opening of the mosques, a majority from the Muslim community has decided to wait for the opening, but a few have decided to open mosques.

Meanwhile, Union Minister of State for External Affairs V. Muraleedharan, said the Pinarayi Vijayan led Left Front government was trying to escape from the way it has handled the Covid-19 spread which has gone out of hand with cases increasing after opening the places of worship.

Reacting to that, State Devasom Minister Kadakampally Surendran pointed out that he felt sorry for Muraleedharan. 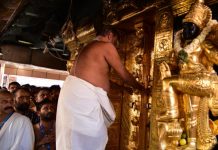