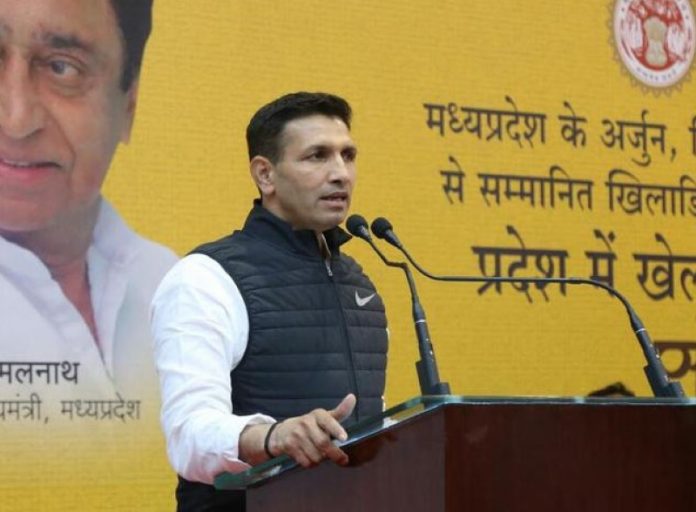 The former minister in Kamal Nath government, Jitu Patwari, on Wednesday accused the Centre of conspiring to topple the Congress government in Madhya Pradesh. He said no less a person than Chief Minister Shivraj Singh Chouhan has admitted it.

Patwari told a press conference, “During the Indore visit on Monday, Chief Minister Shivraj Singh Chouhan accepted before his party’s activists from Sanwer that he toppled the government at the instance of Prime Minister Narendra Modi, Home Minister Amit Shah and BJP National President J.P. Nadda.”

An audio clip in which Chouhan is allegedly heard making this claim is being widely circulated. The BJP has so far vehemently denied the Congress allegations of complicity in the collapse of the Kamal Nath government in March. Chouhan has been among the loudest in his denials.

He is purportedly heard saying in Hindi in the audio clip, “It was the central leadership which had decided that the government will be dislodged, else it would ruin everything”.

“Tell me, was it possible to dislodge the government without Jyotiraditya Scindia and Tulsi Bhai? There was no other way,” he is allegedly heard telling party workers at Sanwer. He visited the area on Tuesday.

Media has refrained from owning up the authenticity of the audio clip. The BJP or the Chief Minister have not reacted so far. The “Tulsi Bhai,” referred to in the clip, is a Scindia loyalist and former health minister who had initiated action on the corona epidemic in the state. He joined the BJP along with him.

Congress spokesperson Narendra Saluja, “vouched for the authenticity of the clip” claiming that the party would release the video of the meeting if Chouhan disowned his voice in the audio.

“We were insisting for a long time that the conspiracy to topple Congress government was hatched in the state in collusion with the Centre. Chouhan has now accepted it. He can be heard saying he couldn’t have become the chief minister without help from Jyotiraditya Scindia and Tulsi Silawat. He will do all that he can to ensure Silawat wins the by-election from Sanwer,” Patwari said.

“Silawat sold himself despite being Health Minister during Corona times. We will not let such a person win a by-election at any cost,” said the former minister.

“This was the man who was contesting elections for more than 30 years for Congress. How insensitive he has turned against his own people. Should he be allowed to win an election?”

Congress will now approach the Supreme Court after consulting experts on the matter. “We will also appeal to the President,” the Congress members said.

“Chouhan accepted the Prime Minister and Union Home Minister consented to delay the lockdown to pull down the state government. Congress has been consistently warning the epidemic spread throughout the country due to the operation to topple the MP government. Indore and other airports were also not locked down despite Rahul Gandhi’s advice. We will complain to the President because it is a criminal act,” Patwari said.

“Chouhan visited Indore after the city had gone through 77 days of trauma. He had killed democracy and now comes to help a traitor win the election,” the Congress said.

“By now our city had reached the sixth spot among the Corona-infected towns in the nation. More than 4,000 persons have been infected and 165 have died. When the chief minister arrived here, we hoped that he would formulate a strategy to deal with the pandemic and would offer a condolence to the families of the deceased, but it was just a political mission for him,” Patwari said.

“The patients were upset, the hospitals plundered them. Many have died for want of treatment. He has disappointed us all with his insensitivity. Indore people have watched him turn the visit into a joke. They will teach him a lesson. The Congress had conveyed through the collector a request for a delegation to meet the chief minister. He had no time,” Patwari said further.

“Even though all this, Congress has decided to stand with the administration in dealing with the pandemic. The government has left the people to fend for themselves while the pandemic has spread unchecked. The Congress government will carry out a public awareness campaign. Will distribute 25 lakh masks house to house. We are united to make the City number one in cleanliness, now we will stand together to beat Corona,” said Patwari

Markets open in red on Wednesday