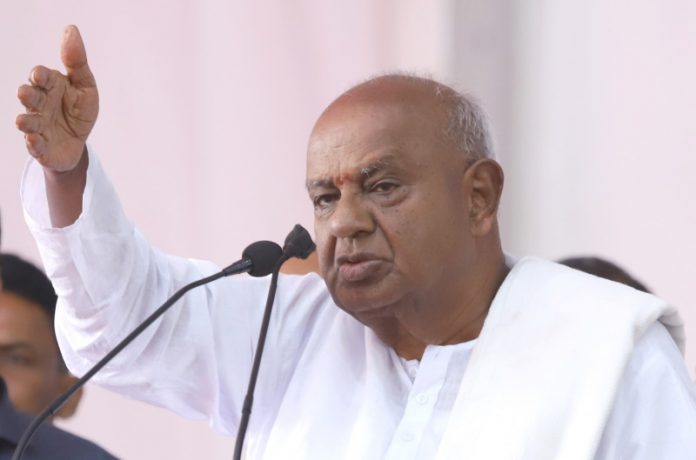 “Gowda, Kharge, Gasti and Kadadi have been duly elected unanimously to fill the seats in the Upper House in place of Kupendra Reddy of the JD-S, B.K. Hariprasad and Rajeev Gowda of the Congress, and Prabhakar Kore of the BJP, who are retiring on June 25 on the expiration of their term of office,” returning officer M.K. Vishalakshi said in a statement here.

Though polling for the biennial election was slated on June 19 in the event of a contest, the returning officer declared the results after the end of the last date of withdrawal of nomination, which was Friday, as there were no other candidates in the fray.

Former Prime Minister Deve Gowda, 87, got elected to the Upper House with the support of the opposition Congress, as his regional party has only 34 legislators in the 225-member state assembly, 10 short of the required 44 votes.

With the BJP having 117 legislators, including the speaker, victory of Gasti and Kadadi was a formality.

As Kharge was the only candidate the Congress fielded, his win was also assured as the party has 68 legislators.

Gowda enters the Rajya Sabha for the second time, 24 years after he was elected when he was Prime Minister from June 1996 to April 1997.

Gowda, 87, lost in the May 2019 general election from Tumkur Lok Sabha seat to BJP’s G.S. Basvaraj, though his grandson Prajwal Gowda won from the JD-S bastion Hassan, defeating A. Manju of the BJP.

Kharge, 77, enters the Upper House for the first time a year after he lost in the 2019 general election from the Gulbarga reserved Lok Sabha seat in the state’s northern region to BJP’s Umesh Yadav.

By fielding Gowda for the fourth seat, the Congress and JD-S, who are allies and had post-poll and pre-poll alliances for the Lok Sabha and state Assembly elections in May 2019 and May 2018, have queered the pitch and denied the BJP from contesting or winning the third seat from the southern state.

Gasti, 55, an advocate by profession, hails from the barber community and belongs to Raichur district in the state’s northern region, about 490 kms away from Bengaluru.

Kadadi, 50, hails from Gokak in the state’s northwest Belagavi district. He is a strong leader of the politically dominant Lingayat community, which is the ruling party’s vote bank and from which Karnataka Chief Minister B.S. Yediyurappa also hails.

Kadadi is the party’s Belagavi district zilla parishad president and runs a cooperative bank at Gokak in the state’s northwestern region, about 540 km from Bengaluru in the southern state.

According to affidavits the four candidates filed along with their nominations, Gasti does not even own a car, has not filed income tax returns and has only Ra 1 lakh in cash.

“In contrast, Kharge declared assets valued at Rs 2.8 crore, while his wife’s assets are worth Rs 81 lakh,” his affidavit revealed.

Kharge’s liabilities, including that of his wife’s are Rs 23.7 lakh.

Similarly, Kadadi owns assets worth Rs 1.02 crore, as per his affidavit.

Anthony Bourdain had no Narcotics When he Died