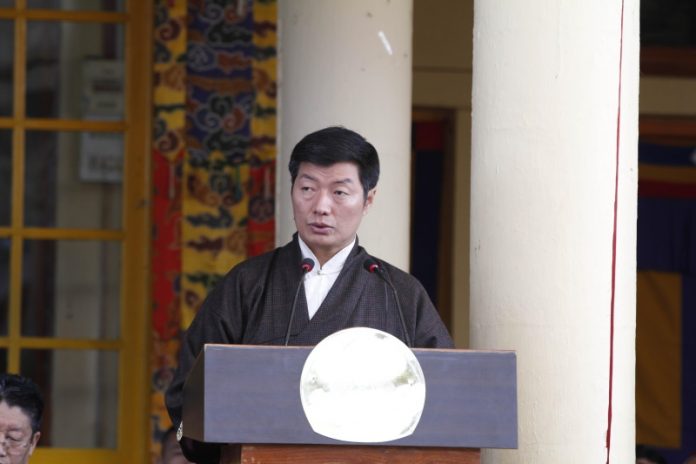 Tibetan government-in-exile President Lobsang Sangay on Thursday condemned the death of the Indian soldiers in Ladakh’s Galwan valley and urged both India and China to resolve the issue non-violently and amicably.

At the same time, Sangay said, “India needs to learn from the Tibet narrative and how the Chinese leadership mindset works moving forward”.

According to a post on the Central Tibetan Administration’s (CTA) website quoting Sangay, “We have been saying it for 60 years when Tibet was occupied, Mao Zedong and other Chinese leaders said Tibet is the palm we must occupy, then go after five fingers and the first finger is Ladakh, Nepal, Bhutan, Sikkim and Arunachal Pradesh.”

“So we had incidents, and Dokhlam in 2017, now it’s happening in Ladakh and then there is pressure on Nepal, Bhutan and Arunachal Pradesh, so on and so forth. So we must learn what happened to Tibet, this is a big lesson for India. Unless you know what is happening in Tibet or what happened in Tibet, you will not fully understand Chinese leaders’ mindset, their strategy, they have the palm, Tibet, now they are coming after five fingers.”

Speaking to Northeast Live news channel, Sangay said the trust deficit on the pandemic, and the paranoia of dealing with coronavirus and other internal issues have led the Chinese leadership to divert attention by externalising the problem with the current border incursion happening in India.

For Sangay, dialogue between India and China is the best way to solve any issue and the only way to move forward.

Elderly Buddhist monk the Dalai Lama, however, did not make any reference to the ongoing Indo-China LAC tension but praised India during virtual interaction with famed writer Pico Iyer organized by the Jaipur Literature Festival from his residence here on Wednesday.

“I love Chinese culture, but in China there is no freedom of speech. So, becoming a refugee was sad from one point of view, but provided opportunities from another. I feel very fortunate to live in this (India) country and enjoy its freedom to the full. I am also deeply honoured to be the government of India’s most longstanding guest,” the spiritual leader, who is turning 85 on July 6, said.

On being asked by Pico, “How have you been?” the pontiff replied, “Check my face.”

“Listen to the strength of my voice. My regard for the thousands of years old Indian traditions of ‘ahimsa’ (non-violence) and ‘karuna’ (compassion) gives me both self-confidence and inner strength.”

“Since I became a refugee, I have enjoyed living in India. For us, it is sacred land. In Tibet, we cherished the wish that we could visit Bodhgaya at least once in our lifetimes, much as Muslim hope to make the pilgrimage to Mecca. As refugees now, we’re able to go to Bodhgaya every year,” the Dalai Lama, who enjoys a moment of laughter during his conversation, said.

Taking an indirect jibe at China, the Nobel Peace Laureate observed: “We should expand the influence of the UN and accord equal status to all its members.”

“Confining the power of veto over decisions to only a few is no longer democratic. Wherever there are problems in the world, the UN steps in. It paid attention to the crises involving the Rohingya and in Yemen. It concerns itself with the poor and starving,” he added.

The Dalai Lama has been living in India since fleeing his homeland in 1959. The Tibetan government-in-exile is based in this northern hill town of Dharamsala in Himachal Pradesh.