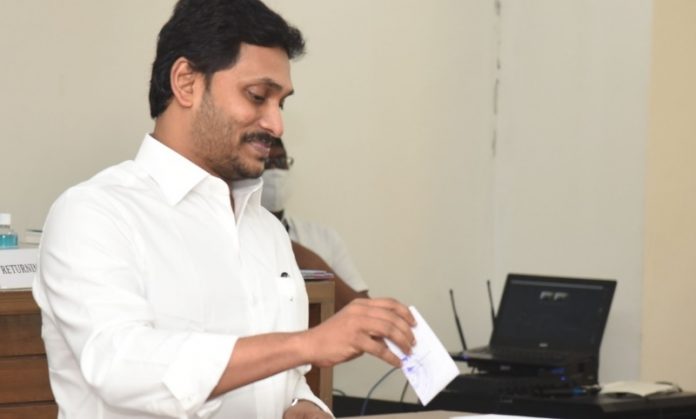 Members of the State Legislative Assembly were casting their votes at the polling booth set up in the committee hall of the Assembly at Velagapudi here. The officials have arranged two compartments to enable the MLAs to cast their votes.

The polling, which began at 9 a.m., will continue until 4 p.m. The results are expected to be announced at 6 p.m.

While the election of all four candidates of the ruling YSR Congress Party (YSRCP) was a mere formality, the entry of main opposition Telugu Desam Party (TDP) in the fray made the election inevitable.

Chief Minister Y. S. Jagan Mohan Reddy and his cabinet colleagues were among the early voters.

Ministers Pilli Subhash Chandra Bose and Mopidevi Venkata Ramana, industrialist Alla Ayodhyarami Reddy, and Reliance Industries vice-president and sitting MP Parimal Nathwani are the YSRCP candidates. With 151 members in the 175-member House, the ruling party has required strength to ensure the election of all four candidates.

The TDP fielded its general secretary Varla Ramaiah to force a contest. Though the main opposition party officially has 23 members, three of them have rebelled against the party and are sailing with the YSRCP.

The YSRCP too had issued a whip to all its Legislators. It has asked all MLAs to cast first-preference votes to the candidates.

Each candidate needs at least 36 votes to get elected. With 151 MLAs, the YSRCP is confident of winning all the four seats with first-preference votes.

Cocktail of suspicion and distrust against govt, says Congress