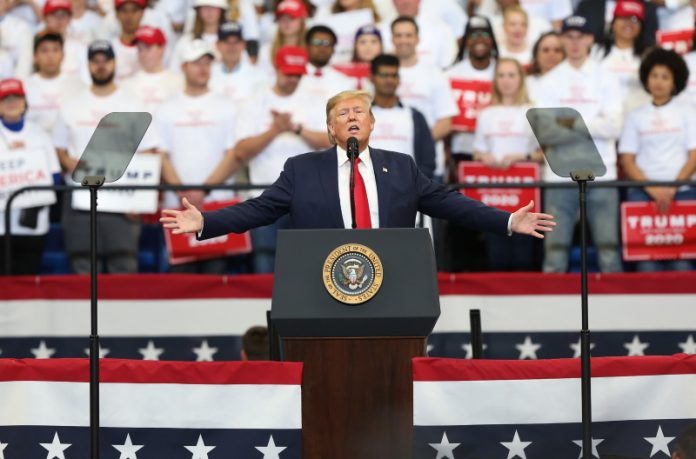 US President Donald Trump said that there will be no curfew in Tulsa, Oklahoma, where he’s scheduled to hold a campaign rally Saturday evening, his first since March.

In a tweet on Friday, Trump said he spoke to Tulsa Mayor G.T. Bynum who told him that “there will be no curfew tonight or tomorrow” for rally-goers, reports Xinhua news agency.

Bynum announced the curfew in an executive order on Thursday and said that it would only affect the area near the BOK Center, where Trump is to speak.

The order said the Mayor has received information from law enforcement agencies that showed “individuals from organized groups who have been involved in destructive and violent behaviour in other States are planning to travel to the City of Tulsa for purpose of causing unrest in and around the rally”.

The rally was previously scheduled to take place on Friday, the Juneteenth, a day that commemorates the end of slavery in the US.

Trump rescheduled the event, the first of its kind for him in more than three months, for Saturday after strong pushback, as Tulsa was home to one of the worst incidents of racial violence in the nation’s history, where dozens of African-Americans were massacred 99 years ago.

Moreover, demonstrations continued across the US against police brutality and racism in the wake of George Floyd’s death in police custody.

Floyd, a 46-year-old unarmed African-American man, died on May 25 during an arrest in Minneapolis, Minnesota, after a white police officer kneeled on his neck for nearly nine minutes.

Trump’s Tulsa rally will be held amid the coronavirus pandemic, which has infected more than 2.2 million people and taken nearly 120,000 lives in the US.

Health experts have warned against large-scale gatherings, as some states, including Oklahoma, are seeing a surge in confirmed cases, while they are reopening.

Anthony Fauci, director of the US National Institute of Allergy and Infectious Diseases and a key member of the White House coronavirus task force, has said that he wouldn’t personally attend rallies.

Attendees of the Tulsa rally will receive temperature checks, hand sanitizer, and masks before entering the BOK Center, which can hold 19,000 people, according to Trump’s re-election campaign.

A campaign spokesman added that masks will be optional.

They have also been asked to sign a waiver releasing the Trump campaign from responsibility for possible exposure to the coronavirus.

White House press secretary Kayleigh McEnany said on Friday that she and some other White House officials will attend the rally but she won’t wear a mask.

“It’s a personal choice. I won’t be wearing a mask. I can’t speak for my colleagues,” she told reporters during a press briefing.

“I’m tested regularly. I feel that it’s safe for me not to be wearing a mask.”

According to a new Fox News poll released on Friday, 59 per cent of the respondents said it’s a bad idea for presidential candidates to hold large political events and rallies, while 23 per cent said doing so is a good idea. Another 16 per cent said it depends.

Currently, 84 pe rcent still said they are at least somewhat concerned about the spread of coronavirus in the US. That includes 54 per cent who said they feel very concerned.

Banks not to pay further dividend from FY20 profits