Former Prime Minister Manmohan Singh echoing the party view on China in the Congress Working Committee meeting said if the situation is not tackled properly it can lead to a serious situation.

Endorsing party chief Sonia Gandhi’s view that the face-off at the Line of Actual Control in Laddakh is a full-blown crisis, Manmohan Singh said: “The crisis on the border, which if not tackled firmly, can lead to a serious situation.”

Manmohan Singh on Monday slammed the Prime Minister on the Chinese transgression accusing him of delivering “disinformation” following Modi’s statement in the all-party meeting and later clarification by the PMO. Singh said that Prime Minister should know the implication of his words.

“The Prime Minister cannot allow them to use his words as a vindication of their position and must ensure that all organs of the Government work together to tackle this crisis and prevent it from escalating further,” said Singh.

Manmohan Singh in his statement on Monday said: “We remind the Government that disinformation is no substitute for diplomacy or decisive leadership.”

Manmohan Singh was criticising Modi’s statement at the all-party meeting on Friday and later clarification by the Prime Minister’s Office on the June 15 night’s violent face-off between the Indian and Chinese sides at Galwan Valley on the Line of Actual Control that led to the death of 20 Indian soldiers, including a commanding officer.

The PM statement was used by the Chinese to get away from their misdeeds at the Galwan Valley. 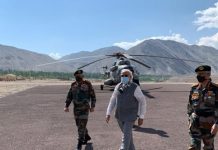 PM visits forward location in Ladakh amid tension with China