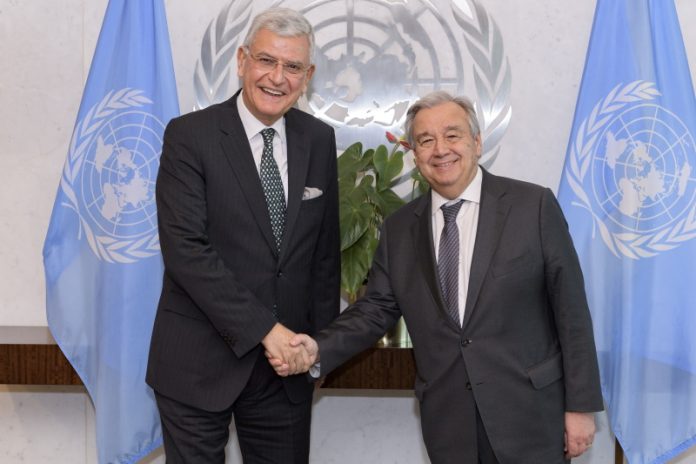 Volkan Bozkir, the president-elect of the 75th session of the UN General Assembly (UNGA), said that he will work hard to build consensus and trust among the world body’s member states.

“Consensus building will be at the core of all my efforts,” Xinhua news agency quoted Bozkir as saying in an informal meeting of the world body on Monday.

The expectations and views of each of the world’s regional groups and its members “will be equally important and valuable to me”, he said.

“I will represent the UN membership as a whole,” Bozkir told the virtual briefing, making clear that he would serve “the best interests of the UN and its member states”.

Bozkir said that he will work in sync with the secretary-general’s agenda and priorities, to be “as effective as we can”, and liaise closely with the Economic and Social Council (ECOSOC) too, to “harmonize” their essential work.

A career diplomat for nearly 50 years, the Turkish politician said: “today is the start of a new chapter for me”.

On the principle of multilateralism that underpins the “parliament of the world”, he said it continues to be the most effective way to seek global solutions, and that the UNGA is “uniquely situated” to steer those efforts.

Extending congratulations to the president-elect, UN Secretary-General Antonio Guterres maintained that Bozkir will be presiding over “a crucial year in the life of this organization”.

He stressed the importance of highlighting the value of multilateralism during the organization’s 75th anniversary, the continued need to respond to the COVID-19 pandemic, and the need to evaluate a range of global challenges — from climate change to human rights and gender equality.

Acknowledging Bozkir’s aim of establishing greater trust among countries, the UN chief said that “this is essential for progress at any time, but especially now”.

Before welcoming the next UNGA president, Guterres thanked incumbent Tijjani Muhammad-Bande of Nigeria, for his “capable stewardship” during the “extraordinary time” of COVID-19.

Meanwhile, Muhammad-Bande said the General Assembly would observe on Friday the 75th anniversary of the signing of the UN Charter, through a virtual meeting that reflects on the foundational document of the UN, including its role today and in the decades to come.

He also announced a high-level meeting scheduled for June 30 to inaugurate the first session in a series of colloquia on poverty eradication.

Tyga to perform in Mumbai for the 1st time