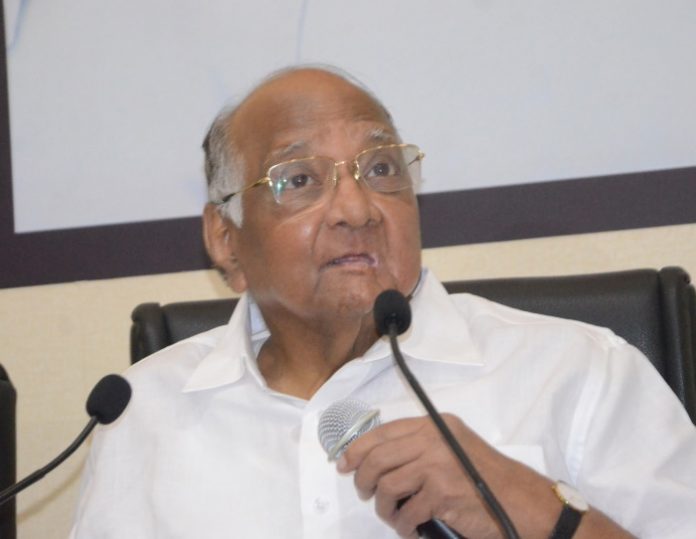 Attacking Pawar, the BJP MLC accused him of playing casteist-cum-divisive politics and said: “he is the Coronavirus” which has afflicted the state.

“He (Pawar) has been the head (CM) of the state, but he did only injustice to the Bahujan community. He has no ideology, but ignites small communities to force them to join him and then do injustice,” Padalkar said.

He accused the veteran NCP leader of allegedly denying reservations to the Dhangar community and instead politicizing the issue.

Padalkar’s comments took even the BJP by surprise, coming a day after Leader of Opposition (Assembly) Devendra Fadnavis claimed that the NCP wanted to join hands with the BJP to form the government in the state.

However, Fadnavis along with Leader of Opposition (Council) Pravin Darekar condemned the statement of Padalkar, with the latter warning that he (Padalkar) would have to face the repercussions of his unbridled comments from his community.

NCP activists staged protests and raised slogans against Padalkar in Mumbai, Pune, Nashik, and in Beed, they burnt his effigy, while a protest was announced in Pune on Thursday in support of the 79-year old NCP chief.

NCP Housing Minister Jitendra Awhad said, “The man who was begging to join the NCP, and was abusing (PM) Narendra Modi later went and got a ticket from the BJP”, so what was his locus-standi to attack Pawar in such derogatory terms.”

Hitting back, NCP spokesperson Mahesh Tapase labelled Padalkar as “a party-hopper who is affected by a mental bug”.

“He backstabbed the Bahujan communities by siding with a communal party. Instead of criticizing Sharad Pawar, he should first prove what he has done for the community,” Tapase said.

Another NCP leader Ankush Kakade demanded an unconditional apology from Padalkar and threatened to ‘gherao’ him wherever he travels in Maharashtra.