Pinjra Tod activist Natasha Narwal, who is currently in judicial custody in Tihar Jail in a case relating to Delhi riots, on Wednesday told the Delhi High Court that the video conferencing facility in jail was suspended after “large scale violence” took place.

Narwal’s counsel advocate Adit Pujari told a single-judge bench of the High Court presided by Justice C. Harishankar that as per information received by him, Jail number 6 in Tihar Jail, where his client is lodged, was under a complete lockdown following incidents of violence among some inmates on June 16.

“The video conferencing facilities were thus not being allowed, Pujari said adding that Narwal was not subjected to any violence.

Opposing the submissions made by Pujari, Delhi government’s senior Standing counsel (Criminal) Rahul Mehra said as per the instructions he got from DG Prisons, the reason for non-operation of video conferencing was “connectivity issue”.

“I will file a status report in this regard,” said Mehta.

The court has now posted the matter for further hearing on June 29.

The arguments came in while the court was hearing a petition filed by Narwal seeking a direction to the Tihar Jail authorities to allow her access to her counsel via video conferencing.

In its charge sheet, the Delhi Police have alleged that both Natasha and another Pinjra Tod activist Devangana Kalita were actively involved in hatching the conspiracy to cause riots near Jafrabad Metro Station in Delhi.

“They were also part of a larger conspiracy and were found to be connected to the “India Against Hate” group and Umar Khalid. The message, found in the phone of an accused, on WhatsApp chat, reveals the conspiracy and the extent of preparation for causing riots,” the statement by the police added. 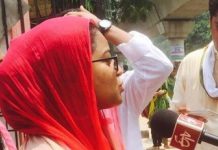