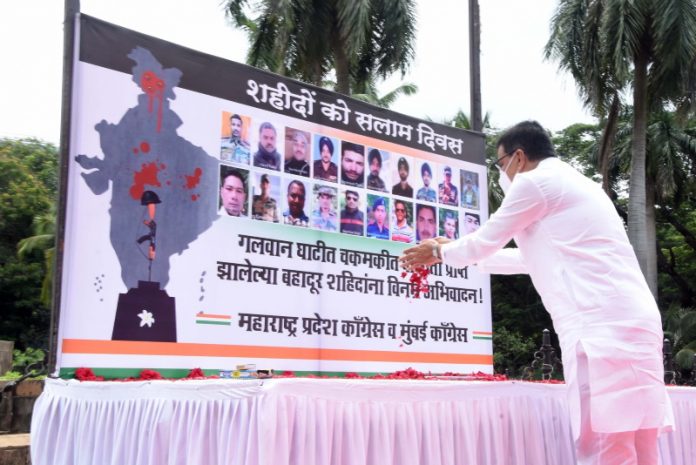 The Maharashtra Congress on Friday launched a campaign ‘#SpeakUpForOurSoldiers’ and targeted the Centre for “failing miserably and majorly surrendering” before China over the border issue in Ladakh.

The party also launched a statewide agitation against the BJP-led central government and paid homage to the 20 soldiers martyred in the June 15 border skirmish with the PLA troops and demanded answers from the Centre on the issue.

“From everything that is happening on the India-China border, our foreign policy seems to be wrong. Until today, we managed to keep China in check, but the BJP-led government has failed to protect our borders,” state Congress President and Revenue Minister Balasaheb Thorat said, leading the charge.

Addressing the media, former Chief Minister Prithviraj Chavan said China’s incursion in Ladakh is a matter of deep concern but said the party would support any decision of the Modi government that is in the interest of the country’s safety and security.

“However, Prime Minister Narendra Modi’s statement that China has not infiltrated Indian soil has proved to benefit China and has also had a major impact at the international level. China fully exploited Modi’s statement and has since been telling the world that it didn’t enter Indian territory,” Chavan pointed out.

Though the PMO attempted to justify it later, he demanded, the central government should come out with a clarification on the PM’s remarks, since it is expected that while speaking on such a major and serious issue, the PM “should be more responsible”.

“But that has not happened. Modi and Chinese President Xi Jinping have met 18 times in six years, but it seems those meetings have not benefited India at all,” Chavan said.

The Congress leader further demanded to know how many times China intruded Indian territory in April-May this year, why the PM made such a controversial statement in the all-party meeting, whether it has weakened India’s role in the bilateral negotiations, and what measures have been taken to bring about normalcy on the India-China border.

Asserting that China had not stopped incursions in the border areas, he said satellite images clearly prove that China has not retreated from the Galwan Valley area, but instead there are Chinese military outposts, vehicles moving around, along with the presence of 10,000 troops having large stocks of ammunition, and construction activities.

Chavan said that in a democracy, it is the duty of the Opposition to ask questions and the government’s constitutional obligation to reply to them.