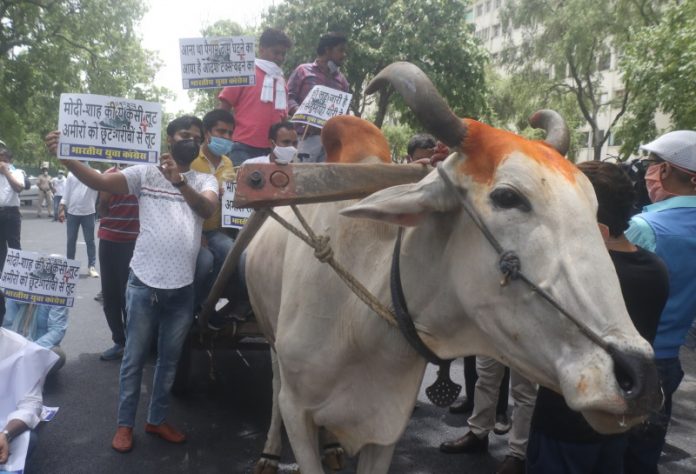 The Congress party on Monday protested against incessant fuel price hike across the country, including the national capital, and urged Prime Minister Narendra Modi-led government to roll back the prices.

The opposition party has repeatedly criticised the Central Government for inflating fuel prices at a time when the country is fighting against the coronavirus disease.

The protests are being held in Chandigarh, Ahmedabad, Patna, among other places. At 10.30 a.m., Delhi Pradesh Congress Committee President Anil Kumar protested against the hike in prices by the Central and Delhi Government at the petrol pump near the IP College.

The party’s youth wing, the Indian Youth Congress, also protested against the unregulated hike in the prices of petrol and diesel. On Sunday, senior Congress leader K.C. Venugopal had said that the party would hold protests in front of the Central government offices.

The Congress has also decided to launch a five-day protest, starting on June 30, against the fuel price hike in each block of the country.

Earlier on Monday, the party also started the #SpeakUpAgainstFuelHike campaign. Congress leader Rahul Gandhi took to Twitter to take a swipe at the Central government for the rising fuel prices and urged people to join the campaign against it.

The 50-year-old leader took to Twitter to show his resentment and stated, “Come and join#SpeakUpAgainstFuelHike campaign.”

This came after the state-run oil marketing companies raised the prices of petrol and diesel on Monday, a day after there was no hike in rates that were increasing continuously for three weeks.