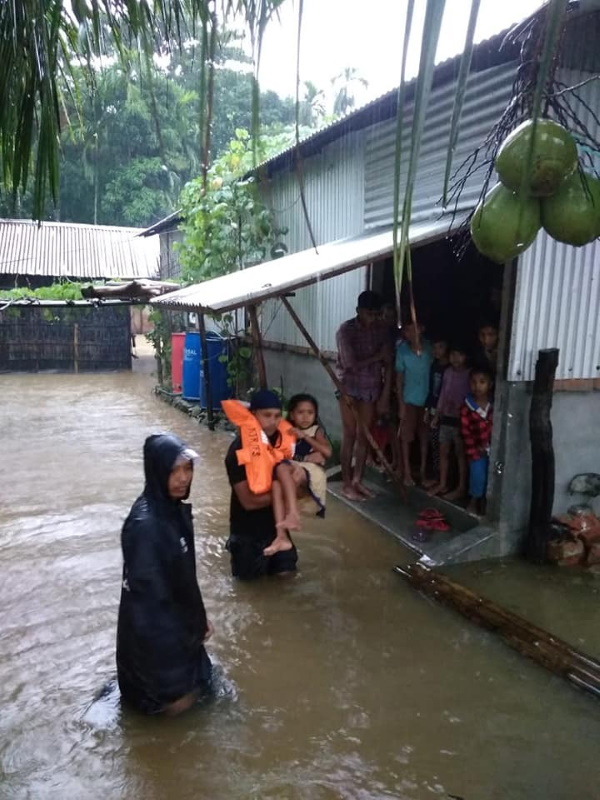 Even as Assam is fighting an all-out war against COVID-19, the deteriorating flood situation, triggered by heavy rains, claimed four more lives taking the death toll to 24 while affecting over 13 lakh people in 25 of the state’s 33 districts, officials said in Guwahati on Monday.

Officials of the Assam State Disaster Management Authority (ASDMA) said that in the current wave of floods since early last week, nine persons have so far died in Barpeta, Dhemaji, Udalguri, Goalpara and Dibrugarh districts taking the total death toll to 24 in the floods and 23 more people were killed in separate landslides since May 22.

According to the officials of various authorities, there have been incessant heavy monsoon showers across the northeast region including Assam, Meghalaya, Arunachal Pradesh causing most rivers including the mighty Brahmaputra to flow above danger levels in many places and inundating fresh areas every day.

Quoting reports of various districts, the officials said: “Over 13.17 lakh people in 2,404 villages affected by the floods and over 83,168 hectares of crop areas were badly affected due to the floods. Around 27,452 people took shelter in 273 relief camps.”

Assam Chief Minister Sarbananda Sonowal has also directed Deputy Commissioners of all the affected districts to address the needs of the flood-hit people urgently while adhering to COVID-19 safety protocols.

Union Home Minister Amit Shah on Sunday discussed the Assam flood situation with Sonowal over the phone and assured all kinds of central government’s help to the state to deal with the situation. Meanwhile, the heavy monsoon rains affected normal life in most parts of the northeastern states.

The rainwater has inundated vast low lying areas of Arunachal Pradesh, Meghalaya and Mizoram. With India Meteorological Department predicting more rains in the next few days, Assam and other northeastern states might have to face tougher days with worsening flood situation along with COVID-19 surge.

The state government has clamped a 14-day total lockdown in Kamrup (Metro) district, in which Guwahati, the state’s main city and commercial hub falls, from Monday midnight. Besides, daily night curfew and complete lockdown on Saturday and Sunday in the entire state was also promulgated to prevent the community transmission of coronavirus.

Women to get free sanitary napkins in Lucknow