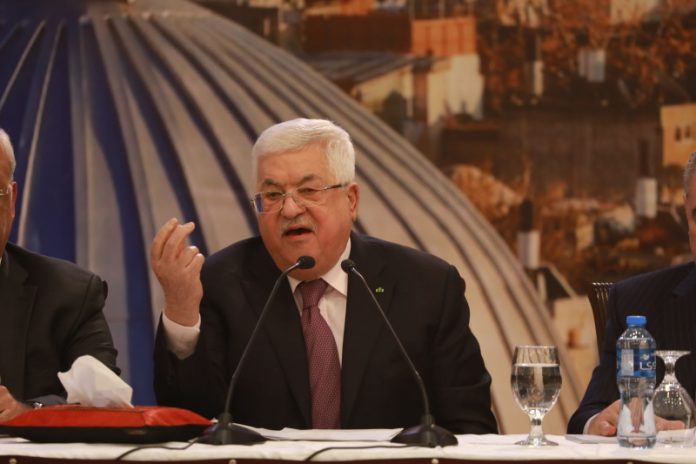 Palestinian President Mahmoud Abbas has rejected Israel’s plan to annex parts of the West Bank on the basis of US President Donald Trump’s the Middle East “peace plan”.

Abbas made the remarks on Monday was made in a telephone conversation with Simonetta Sommaruga, President of the Swiss Confederation reports Xinhua news agency.

Abbas stressed that the Palestinians reject the US Middle East “peace plan”, adding that it violated all international resolutions.

Sommaruga said that Switzerland opposes any unilateral actions or any changes that violate international law and international legitimacy, and called for Israel and the Palestinians for a dialogue.

She told Abbas that her country will continue providing support to the UN Relief and Works Agency for Palestine Refugees in the Near East, mainly in the field of health to combat the coronavirus pandemic.

In another development, during an online meeting with 40 British lawmakers, Palestinian Prime Minister Mohammed Ishtaye accused Israel of planning to dissolve the Palestinian Authority (PA), adding that they will not let Israel do so “because the PA was the result of the Palestinian struggle”.

“The Israeli annexation plan threatens the existence of the Palestinian people and their just cause and also threatens security and stability in the region,” said Ishtaye.

The developments came a day after Israeli Prime Minister Benjamin Netanyahu said that he was willing to negotiate with the Palestinians, asking them to “embrace” Trump’s plan and “be prepared to negotiate a historic compromise that could bring peace to Israelis and Palestinians alike”.

Netanyahu has set July 1 as the date for his plan to annex the Jordan Valley, which makes up some 30 per cent of the West Bank, a territory seized by Israel during the 1967 Middle East war.

The Palestinians, who claim all of the West Bank, Gaza and East Jerusalem, have rejected the idea.

The last Israeli-Palestinian peace talks broke down in 2014, mainly because of their deep divisions on the issues of the Jewish settlements and Jerusalem.

The resumption of peace talks has hit a roadblock since Trump declared Jerusalem as the capital of Israel in late 2017 and moved the US embassy from Tel Aviv to the disputed holy city in mid-2018.

Israel considers the entire Jerusalem as its eternal capital, a fact that is rejected by the Palestinians, who insist that East Jerusalem be the capital of their future independent state.

More than 600,000 Jews live in about 140 settlements in the West Bank and East Jerusalem.

Shubman ‘abuses’ umpire after being given out, decision overturned