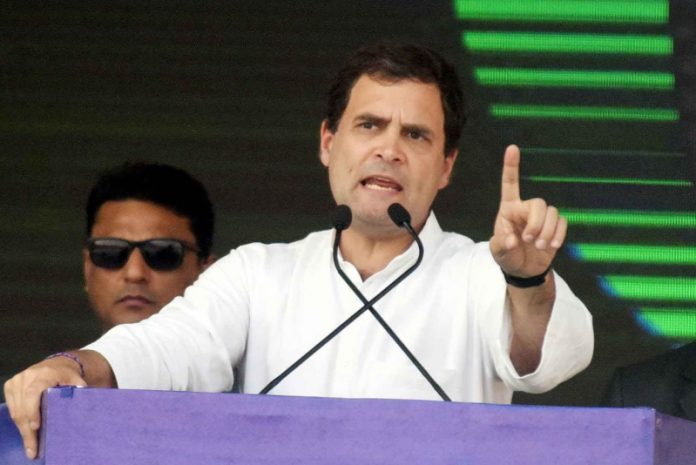 Former Congress Chief Rahul Gandhi on Wednesday assured the nurses working as the frontline fighters against the COVID-19 pandemic that he will take up their issues with the government. He told them that he will write on their behalf to the government to compensate the families of the nurses who died while performing their duties.

As part of the series of interactions, Rahul Gandhi held a conversation with nurses on the Doctor’s day.

While interacting with the former Congress Chief, Vipin Krishnan, a nurse working at the All India Institute of Medical Sciences (AIIMS) in Delhi, who along with his wife have been infected with corona, informed him that two nurses in the national capital died due to Covid pandemic. “Rahul ji I would like to bring something to your attention. Two nurses have died in Delhi, they were from South India. However, they are yet to receive the compensation of Rs one crore announced by the Delhi government,” Krishnan told the Congress MP from Kerala’s Wayanad. Krishnan further said that the government should do something for them. “I want to bring this to your notice since you are the opposition leader,” he said.

Responding to the AIIMS staff, Rahul Gandhi said, “I’ll write a letter and see if we can expedite that.” Krishnan to a question of the Rahul Gandhi over the condition of the medical facilities in Delhi and India said, “I would like to highlight some statistics. We have 1.2 million registered allopathic doctors in India. We have around 3.7 million registered nurses in India. When we are coming to the ratio, it is 1:1500 for doctors and 1.7:1000 nurses in India. The WHO recommended ratio is 1:1000 doctors and 3:1000 nurses when coming to the recommendations of the WHO.

“Running short in the scenario of human resources, but still we are fighting hard. But in our country, the scenario is entirely different. There is a sea of difference between government hospitals and private hospitals in India,” Krishnan said.

To this Rahul Gandhi asked Krishnan, what difference does he see. Krishnan said, “When we look into the private sector, there is a lot of discrimination. Private nurses are saying that their salaries are being cut. How will they care for their families during this pandemic? In such a situation, I think the government must help them and pay their entire salaries.”

Rahul Gandhi also asked about testing not being allowed in many hospitals in Delhi to which the AIIMS nurse said, “This is indeed a sad state of affairs. I want to inform you about some statistics. On May 27, the infection rate in Delhi was 13.7 per cent we were doing 7,000 tests per day. By June 12-13, our infection rate had crossed 30 per cent and we are doing under 5,000 tests per day.

“This is surprising given that our deaths and infection rates are increasing, but we have reduced testing. I don’t understand what is happening,” Krishnan said.

The Congress leader then said that a doctor from a private hospital had told him that it becomes impossible for them to work if they cannot test Covid-19 patients.

“But I believe that we have to face the problem, so we should accept the problem, define the problem accurately and then fight the problem. I don’t know how you react to that,” he said. To this, the AIIMS staffer said, “You are absolutely correct. We have a pandemic situation and AIIMS Director (Randeep Guleria) has said that we will peak in June-mid July.

“Even the Delhi Chief Minister Arvind Kejriwal has stated that they are expecting 5.5 lakh cases. We are having 10,000 beds in Delhi. Can you imagine the depth of the situation where 5.5 lakh people are coming, of course, they won’t come at the same time, but average one lakh patients a day. I can’t imagine the depth of the situation. What will he do?” Krishnan questioned.