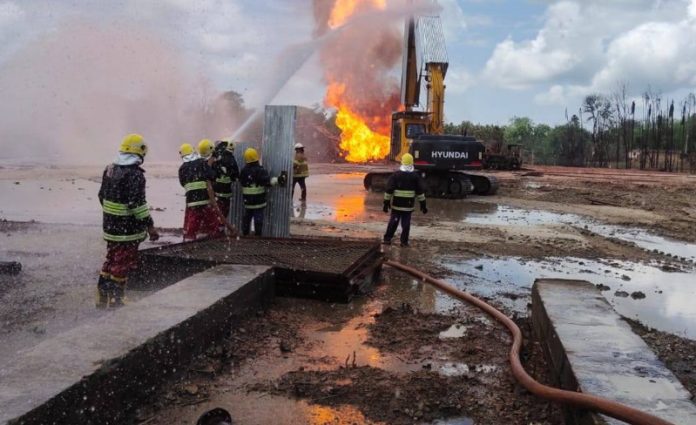 The National Green Tribunal has deferred its direction for deposition of Rs 25 crore interim fine by the Oil India Ltd, following the gas well leakage and fire in Assam, till the actual amount and its disbursement plans are worked out.

The incident happened in Baghjan in Assam’s Tinsukia district. An enormous volume of inflammable natural gas which was leaking from the Baghjan-5 oil well of the company since May 27 caught fire on June 9, claiming lives of two fire-fighters.

On June 25, the tribunal had imposed a heavy fine of Rs 25 crore on OIL for causing damage to the environment, human and wildlife and over its failure to stop the oil well fire. An eight-member committee was also constituted to look into the matter.

On July 2, the tribunal deferred the direction after senior advocate Mukul Rohatgi, appearing for OIL, assured that the company has itself taken several measures for rehabilitation of the displaced families and deposited a sum of Rs 4.83 crore with the District Magistrate as interim relief.

He submitted that the committee is ‘unnecessary’ and so is the direction to deposit the amount of Rs 25 crore as the OIL is committed to compensate the victims and restitute the environment. It will pay whatever amount required on its liability being ascertained, he said.

A bench of NGT Chairman Adarsh Kumar Goel observed: “In view of this assurance, we defer our direction for the deposit of Rs 25 crore till the actual amount and its disbursement plan are worked out in the light of the report of the committee after considering the viewpoint of victims as well as the OIL.”

However, adequacy of steps taken by the OIL will have to be looked into by the committee and then by this tribunal following due process of law, it added.

The tribunal said that the OIL is stated to have set apart more than Rs 25 crore and Rohtagi also categorically assured that OIL being a public sector undertaking, there will be no difficulty in promptly making available whatever amount is required for the discharge of its liability.

Baghjan is one of the 23 oil wells set up by OIL to tap the large gas reserves in the Brahmaputra basin located near the Eco-Sensitive Zone of the Dibru-Saikhowa National Park.

The blow-out left behind a mixture of chemical compounds that are toxic for land and vegetation. It is not only hazardous to the health of the people but also severely affects their livelihood, mainly agriculture, fishing, and animal rearing.

The plea filed by activist Bonani Kakkar had pointed at the failure of the OIL authorities in preventing the blowout, resulting in a massive fire causing irreparable loss to the entire biodiversity of the region and loss of lives and property.

“Due to the negligence and lack of concrete effort to control the spread of the oil and gas leak, an enormous fire broke out in the area which continues to rage causing displacement of more than 1600 families,” Kakkar said.

The matter will now come up for further consideration on July 29, the NGT said.

General Elections 2019: CPM to Contest from Madurai in Tamil Nadu