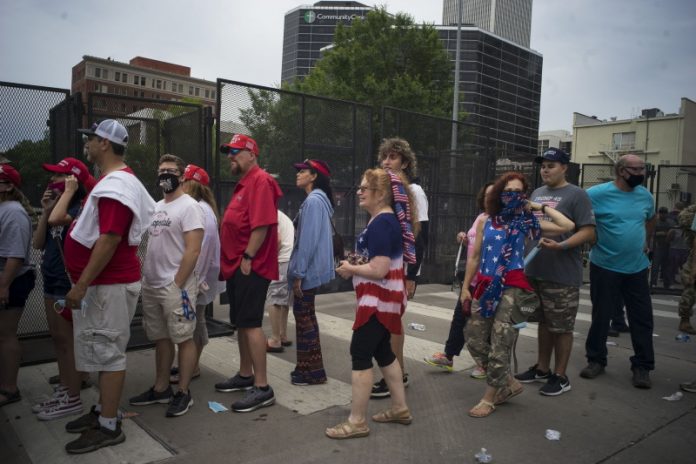 The US city of Tulsa has witnessed a sudden spike in the number of COVID-19 cases after President Donald Trump held his re-election campaign rally on June 20 amid the pandemic, authorities said.

This week saw high numbers of confirmed cases being reported in the second-largest city in Oklahoma state, with nearly 500 new infections in two days, Xinhua news agency quoted Bruce Dart, executive director of the Tulsa Health Department, as saying to the media on Wednesday.

The Tulsa Health Department reported 266 new cases on Wednesday, bringing the total number in the county to 4,571.

There are 17,894 cases in Oklahoma and 452 deaths, according to Johns Hopkins University.

When asked if the cases in Tulsa were going up due to the rally on June 20, Dart said that there were several large events a little over two weeks ago.

“I guess we just connect the dots,” Dart was quoted as saying.

“The President’s rally was 18 days ago, all attendees had their temperature checked, everyone was provided a mask, and there was plenty of hand sanitizer available for all,” Trump campaign communications director Tim Murtaugh told CNN.

About 6,200 people attended the rally in an indoor arena, according to the Tulsa Fire Department.

Most of them didn’t wear a mask during the rally.

All of Trump’s campaign staffers who attended the rally went into quarantine, however, after interacting with several colleagues who later tested positive for the virus.

Multiple Secret Service officers were also instructed to self-quarantine after two of their colleagues who were on site for the rally tested positive.

OnePlus 6 With Iphone X Notch Announced, to Arrive on May 22