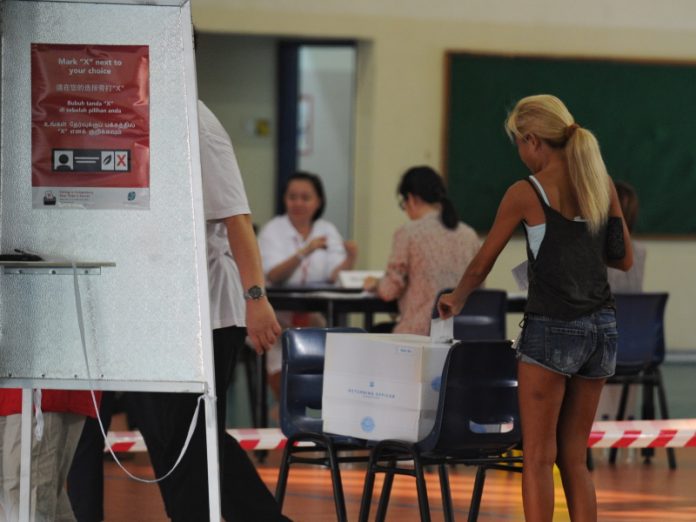 Voting was underway on Friday for Singapore’s general elections, where the city-state’s ruling People’s Action Party (PAP) is contesting on all the 93 seats.

Some 2.65 million people are eligible to vote in these elections, the 13th since independence.

A total of 191 candidates from 11 political parties and an independent candidate are competing for the 93 seats at stake.

Meanwhile, the Elections Department (ELD) has asked voters to vote within the recommended time bands.

Younger voters were encouraged not to vote between 8 a.m. and 12 p.m. unless they have been allotted specific time bands within this window, as the morning voting hours have mostly been allotted to senior voters aged 65 years and above.

ELD has announced the approach for voting by certain groups of voters in view of the prevailing COVID-19 situation.

Voters on Stay-Home Notice or medical certificates for acute respiratory infection, or are having a fever, are advised to vote between 7 p.m. and 8 p.m.

The COVID-19 patients and voters who are on the Quarantine Order will not be allowed to vote.

Besides, ELD has said that there are 6,570 overseas voters in the general election, and 10 overseas polling stations have been set up in Beijing, Canberra, Dubai, Hong Kong, London, New York, San Francisco, Shanghai, Tokyo and Washington D.C.

Local media reported that some overseas voters had cast their votes before Friday.

The ELD has also said temperature screening was being conducted to detect those with fever or respiratory symptoms at the polling stations.

It has asked the voters to take their temperature and check online the queue situation before going to vote, wear masks and comply with safe distancing measures at all times in the polling stations.

The elections are taking place after President Halimah Yacob dissolved Parliament on June 23.

The PAP is the only party with candidates contesting every seat, and they will be challenged in all seats, the second general election in a row that there will be such contests.

Prime Minister and Secretary-General of PAP Lee Hsien Loong said earlier this month that the PAP will fight for every vote.

“Every constituency is contested, so this is not a by-election. It’s a general election for the most important issues concerning the country at the moment of crisis,” he has said.

US Reports Several Violent Attacks Against Rohingyas Across Myanmar