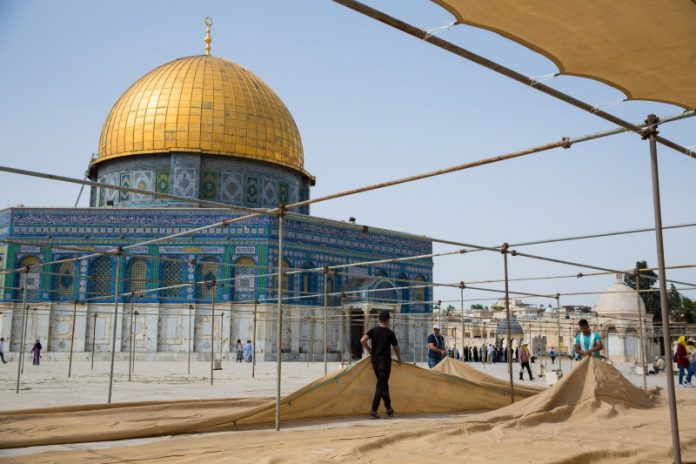 Sheikh Abdul-Azim Salhab, head of the Muslim Waqf (Endowment) Council in Jerusalem, warned that Israel’s order to close a gate of the Al-Aqsa Mosque may ignite a “religious war” in the region.

Salhab on Tuesday told the Voice of Palestine radio that the council received this week an Israeli court’s verdict that orders the closure of the Bab al-Rahma gate of Al-Aqsa Mosque in East Jerusalem.

“Such an Israeli action is an attempt to control Al-Aqsa Mosque in Jerusalem, and this action may ignite a religious war in the region,” said Salhab, who stressed that his council rejects “the illegal Israeli court’s verdict.”

The Bab al-Rahma gate is the eastern gate that directly leads to the Al-Aqsa Mosque, which is a holy site for Muslims around the world, Xinhua news agency reported.

For their part, the Jews refer to the area as the “Temple Mount,” which was the site of two Jewish temples in ancient times.

Israel occupied East Jerusalem, in which the Al-Aqsa Mosque is located, during the 1967 Arab-Israel War. In 1980, Israel annexed the Arab eastern part of the city, but the international community has refused to recognize it.

“We affirm that no power can close Bab a-Rahma, we warn against attacking the worshippers at Al-Aqsa Mosque because it will be a serious issue and will ignite a religious war in the region,” Salhab said.

He noted that Al-Aqsa Mosque and all its yards are Islamic and all Muslims have the right to pray in every part of it free from interference by Israeli decisions and Israeli courts’ verdicts.

In Gaza, the Islamic Hamas movement said in an emailed press statement that the closure of the Bab al-Rahma gate of Al-Aqsa Mosque “is a stupid decision that aims at stealing the Muslim gate and turn it into a synagogue.”

Hamas called on the Arab League and the Organization of Islamic Cooperation (OIC) to move as fast as possible to stop the Israeli threat to the Al-Aqsa Mosque.

Six years after The Lunchbox, Irfan and Nawazuddin Siddiqui to star in a film...

All eyes on Ronaldo, Felix before Portugal’s Euro qualifier