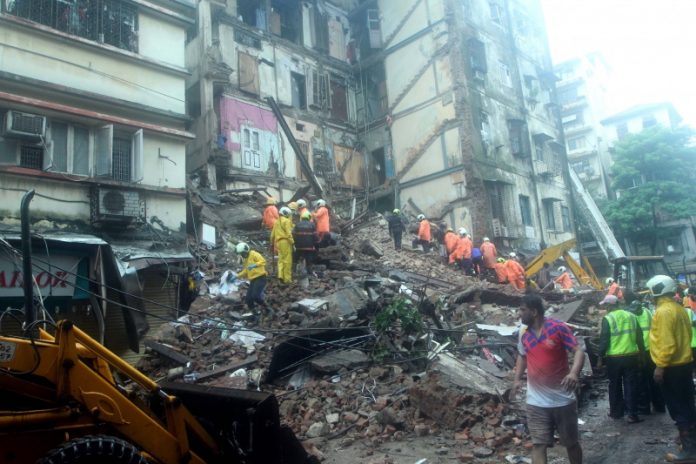 In Mumbai’s worst building disaster this monsoon season, the death toll in the Thursday’s collapse of a part of Bhanushali Building near the GPO shot up to 10 while 12 others were injured, the BMC Disaster Control said on Friday.

Besides, two others were killed in another simultaneous tenement crash in Plot No 8B of Collector Compound, Malvani in suburban Malad west and several more were injured.

In both instances, the relief and rescue continued overnight for the second day, braving heavy intermittent rains which hampered operations.

Two other women whose bodies were recovered from the debris on Friday remain unidentified, said the officials.

Neha Gupta, 45, rescued on Thursday night, continues to be critical in Sir J.J. Hospital, and another injured is Bhalchandra Kandu, 48.

In both incidents, a total of 12 persons have lost their lives so far, more than 30 are injured, while over a dozen were evacuated safely.

The victims of the Malad crash include 23-year-old woman Anjum S. Shaikh, and 18-year- old Faizal W. Sayyed. The 13 others rescued were treated at the Hayat Hospital nearby for minor injuries and discharged.

Mumbai Suburban District Guardian Minister Aditya Thackeray, who visited the Malad crash site, said each of the victim families would be given a compensation of Rs 400,000, while the families of the injured will get Rs 5,000 besides treatment.

“We will take strict action against the building owners if they are found violating the laws and book them for culpable homicide not amounting to murder,” warned Mayor Pednekar, as the two tragedies rocked the city which has been lashed by incessant rains since Monday.