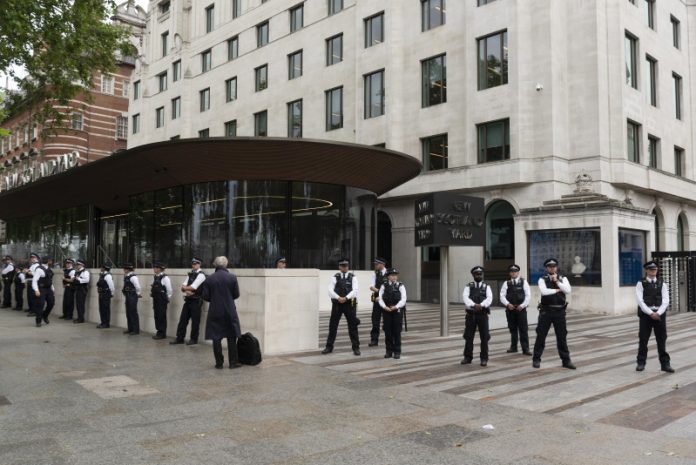 Around 100 people gathered in London’s Hyde Park to protest against face coverings becoming mandatory in shops from this week, according to media reports.

The rules are already in place in Scotland, with England due to follow suit on July 24, the Metro newspaper reported.

From that date, anyone not wearing a mask inside a store can be asked to leave or made to pay a 100-pound fine by the police.

Those attending Sunday’s demonstration could be seen wearing masks cut up to expose their mouths and carrying placards that read: “I will not be masked, tested, tracked or poisoned. This will not be my new normal.”

One man was photographed wearing a white t-shirt that said: “Save human rights, no to 5G, no to vaccinations,” while another woman had the words “question everything” emblazoned on the front of her top.

Speaking to Sky News, Leah Butler-Smith, one of the protest organisers, explained that she wasn’t against face masks in general, but did not like the government telling people “they have no choice but to wear one”.

“Because the government started out by saying there was absolutely no way there was any need for a mask, and many other independent scientists have repeatedly said the same, then it didn’t make sense why they were suddenly going to be mandated – but only in some places.

“Shopworkers who are being exposed to the public all the time don’t have to wear them but the person going into the shop is expected to wear it. It just doesn’t make any sense.”

Butler-Smith also accused the government of trying to “deliberately frighten people” and she said she thought ministers “absolutely” had an ulterior motive to making masks compulsory.