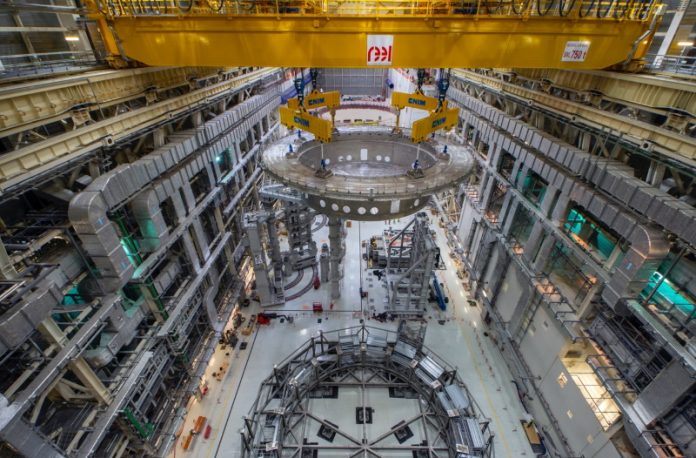 A ceremony to celebrate the official beginning of plasma-based fusion reactor ITER’s assembly was held in southern France on Tuesday with President Emmanuel Macron saying it is a promise of peace and a particular moment in history.

“There are moments when the nations of the world choose to overcome their differences to meet a particular moment in history. The decision to launch ITER, in the mid-2000s, was one of these moments,” he said in a virtual address to mark the start-of-assembly ceremony.

“ITER is a promise of peace,” he added.

Besides Macron, leaders from the European Union, China, India, Japan, Korea, Russia, and the US declared the start of a new energy era with the official start of the assembly of the world’s largest fusion device at ITER.

The ITER machine, the world’s largest science project, is being assembled to replicate the fusion power of the sun that provides light and warmth and enables life on earth.

The launch of the ITER assembly phase is made possible by the arrival of components from all over the world in recent months.

It demonstrates the willingness of the 35 partner countries of the ITER international research project to join together in an enduring way in their common fight against climate change.

“I believe disruptive innovation will play a key role in addressing global issues, including climate change and realizing a sustainable carbon-free society.”

Fusion is safe, with minute amounts of fuel and no physical possibility of a run-away accident with meltdown.

In a statement by Chinese President Xi Jinping read by Minister Wang Zhigang said: “The ITER project — one of the most important international scientific collaborations — embodies the human desire for the peaceful use of fusion energy.”

The fuel for fusion is found in seawater and lithium. It is abundant enough to supply humanity for millions of years. A pineapple-sized amount of this fuel is the equivalent of 10,000 tons of coal.

The cost of building and operating a fusion plant is expected to be similar to the cost of a nuclear fission plant, but without the large costs and long-term legacy of waste disposal.

When ITER is finished, it is expected that it will demonstrate that fusion power can be generated sustainably on a commercial scale.

In recent months, in preparation for the machine assembly, gigantic first-of-a-kind components have begun to arrive in France, in many cases weighing several hundred tons each and more than 15 meters long.

The parts are the culmination of more than five years of fabrication in factories, universities and national laboratories all over the world.

The tokamak components must meet very strict specifications. They must arrive in France on time, according to an intricate schedule.

“Constructing the machine piece by piece will be like assembling a three-dimensional puzzle on an intricate timeline,” said ITER Director-General Bernard Bigot.

“Every aspect of project management, systems engineering, risk management, and logistics of the machine assembly must perform together with the precision of a Swiss watch.

“We have a complicated script to follow over the next few years,” he said.

At end of this period, in December 2025, ITER scientists and engineers will launch “First Plasma”, the initial event demonstrating machine functionality.

The plant at ITER will produce about 500 megawatts of thermal power. If operated continuously and connected to the electric grid, that would translate to about 200 megawatts of electric power, enough for about 200,000 homes.

A commercial fusion plant will be designed with a slightly larger plasma chamber, for 10-15 times more electrical power.

Fusion power plants are carbon-free; they release no CO2. But the benefit of fusion for the fight against climate change depends on how quickly these fusion plants are installed.

“If fusion power becomes universal in complement to renewable energies, the use of electricity could be expanded greatly, to reduce the greenhouse gas emissions from transportation, buildings and industry,” an optimistic Bigot said.

“Enabling the exclusive use of clean energy will be a miracle for our planet,” he added.