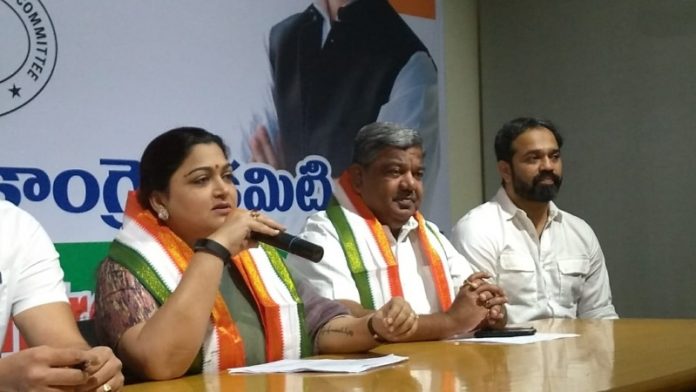 Actor and Tamil Nadu Congress spokesperson Khushbu Sundar has categorically refuted all speculation about her joining the BJP after she welcomed the New Education Policy 2020.

Her view was contrary to the party’s official stance on the policy.

In a tweet she had said: “Sanghis can relax, pls do not rejoice. I am not moving to BJP. My opinion might be different from my party but I am an individual with a thinking mind of my own. Yes, #NEP2020 is flayed n flawed at some places, but I still feel we can look at the change with positivity.”

“There are positives and negatives. The new policy to impact reservation, minorities and adivasis. The negative points can be sorted out,” Khushbu told IANS.

“There is no need for me to put out the negatives and positives in detail,” she added.

Questioned about the party’s stand on the NEP and her views Khushbu said: “I had expressed my personal views. I am like that. When I oppose, do that strongly.”

“I prefer to see the positive aspects n sit n work on the negative ones. We have to offer a solution to the problems n not just raise voices. The opposition also means to work for the country’s future. I would like to take a leaf out of #Atal ji’s life n #UPA where we have worked.

“Politics is not only about making noises, its also about working together. And @BJP4India @PMOIndia has to understand this. We as opposition, will look into it in detail n point out the flaws, its the GOI who has to take everyone in confidence n work on the flaws. #NEP2020,” Khushbu had tweeted.

“My stand on #NEP2020 differs from my party n I apologize to @RahulGandhi ji for that, but I rather speak the fact than be a head nodding robot or a puppet. Everything cannot be about agreeing to ur leader, but about being courageous to voice ur opinion bravely as a citizen.

“Any bill or draft, you will have different opinions, n me someone who fiercely believes in democracy, think it is fine to have differences of opinions. My country is built by all kinds of people, all religious beliefs, non-believers, every party, each of those divided by reservation,” Khushbu said.

According to Khushbu, as a patriotic citizen, she prefers to see and look at every challenge thrown as an opportunity to do better.

“Being in opposition, it is our duty to point out the goof ups, but it is also equally important to learn to accept the good in the bad and give solutions to downside paras,” Khushbu said.

Pointing out the sad state of affairs in village schools Khushbu said why is there no protest against that and the long distances that village kids have to walk to attend school.

Coronavirus toll in China jumps to 563