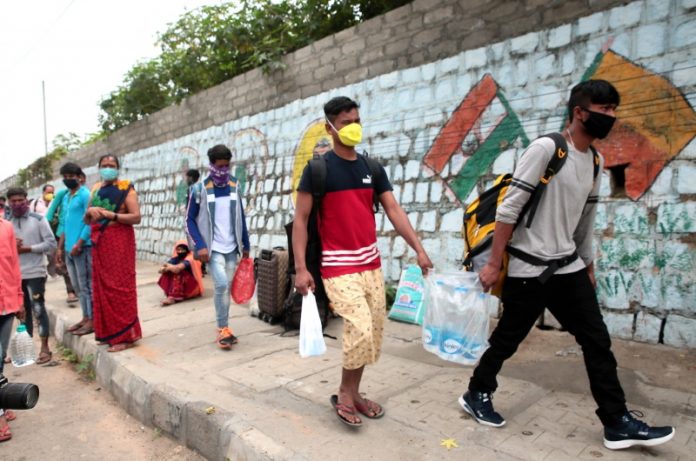 The Supreme Court said on Friday that the Maharashtra government should take steps to ensure that migrant workers still waiting to return to their native places are sent back at an early date.

A bench comprising Justices Ashok Bhushan, R Subhash Reddy and M R Shah had in a June 9 order directed all states/UTs to transport all stranded workers by trains or other modes of transportation to their native places within 15 days.

The bench cited an affidavit filed by Rajesh Kumar, Additional Chief Secretary (Labour) from the Industries, Energy and Labour Department of Maharashtra government, that indicated that some migrants are still awaiting return to their native places from Maharashtra.

The top court observed that the affidavit cites figures in different districts. “In paragraph 13 (of the affidavit), a reply has been given with regard to the list of 52,514 migrant labourers; it has been stated that after verification, it has been found that only 1,137 migrant workers were ready and willing to return to their native places,” the bench noted.

The court said a substantial number of migrant labourers have already reached their native places. “The affidavit further states that in the event any complaints are received from migrant workers by trade unions, NGOs and other local organisation, the same should be shared with the state administration, which shall be attended to promptly. The affidavit further states that the online registration process for Shramik trains stands resumed,” the top court said.

The bench pointed out that none of the states/Union Territories had filed any affidavit to bring on record the mode of and manner in which records of migrants labourers — who have reached their native places — are being maintained in accordance with their skills, nature of employment and other details.

The court noted that on June 9 the top court had issued specific directions. “The details of all migrant labourers, who have reached their native places, shall be maintained, with details of their skills, nature of employment, earlier place of employment. The list of migrant labourers shall be maintained village-, block-and district-wise to facilitate the administration to extend benefits of different schemes which may be applicable to such migrant workers,” said the top court.

The bench observed that the states/UTs should have maintained a record of all migrant workers, who have gone back to different places.

The top court asked the states/UTs to file necessary affidavits within three weeks and ordered for the matter to be taken up after four weeks.

The court observation came in a suo moto case regarding the problems and miseries of migrant workers in the backdrop of the nationwide lockdown to contain Covid-19.

Have fun in the sun With These Cool Tips