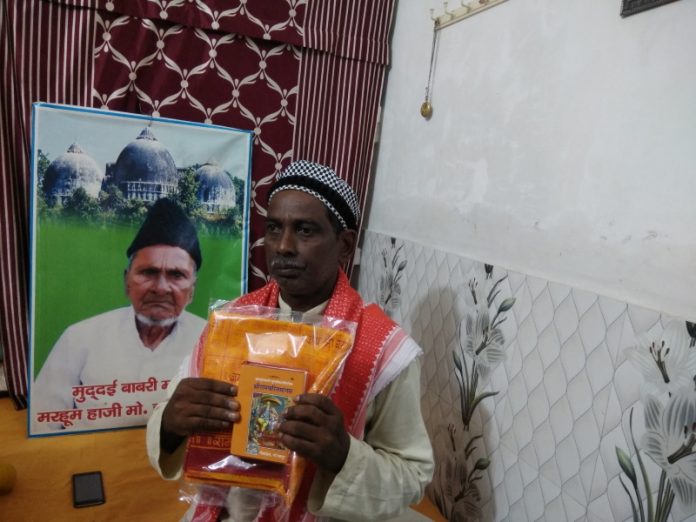 Almost nine months after the Supreme Court delivered its verdict in favour of the Ram temple, for which the ‘Bhumi Pujan’ is being held on Wednesday, the main litigant for the Babri Masjid says that there is no ‘Mandir-Masjid’ dispute now.

Speaking to IANS exclusively, Iqbal Ansari asserted: “Now, no dispute is remaining after the Supreme Court’s November 9, 2019 verdict. Whoever wants to say anything, let him speak.”

“Now, personal differences have been ended with the Supreme Court’s verdict. If we continue to fight, then either China or Nepal will seek to challenge us, or Pakistan would engage us in the border dispute,” he said, adding that Ayodhya doesn’t want to see any Hindu-Muslim dispute now.

Not only that, Ansari said that he had received an invitation for the ‘Bhumi Pujan’ and will definitely go. He has also purchased a copy of Ramcharitmanas and a ‘Gamcha’ printed with Lord Ram’s name to gift them to Prime Minister Narendra Modi.

Ansari also asked all those who who were raising questions about his participation in the ceremony to introspect on their own activities.

“I got an invitation and I am going. The temple construction will bring development in Ayodhya and opportunities of livelihood will increase.”

He said that all religions respect Lord Ram. “In our religion, we also respect the gods and goddesses. People from all religions have been living in Ayodhya together since centuries. It is politicians who create differences of caste and religion. They count people during the elections. Politics of religion and community pushes people back. Presently, it is a pandemic time, so we all should go together. Only a person with true principles will survive in corona.