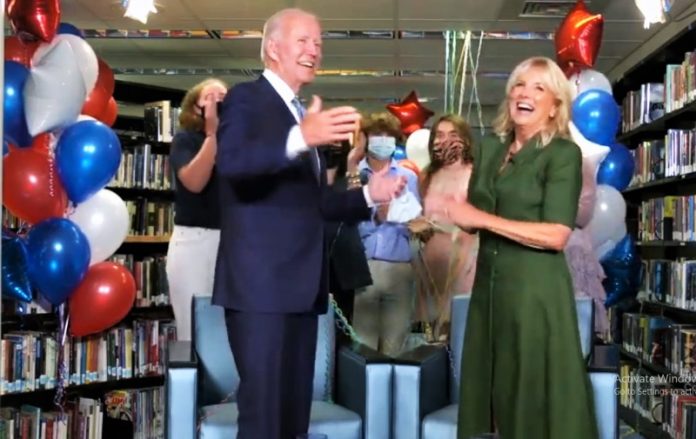 Former US Vice President Joe Biden has formally been nominated the Democratic Party’s candidate to take on President Donald Trump in the November election, winning the majority in a roll call of states in which a young Indian American student, Bianca Shah, delivered Maryland’s votes for him.

With 76 days left as of Tuesday for the November 3 election, the party has officially anointed Biden to battle Trump with Kamala Harris at his side setting the stage for the final showdown and ending his roller-coaster ride to the nomination with wildly fluctuating support in the primaries that at one stage almost wrote him off.

At the virtual convention, a formal tally of delegate votes from the primaries had to be taken through a roll call because Biden’s remaining rival, the self-proclaimed socialist Bernie Sanders officially remained a candidate despite having formally thrown his support for Biden, who received a total of 3,558, giving him more than a majority.

Biden celebrated the announcement with his family at his home in Delaware with confetti, glitter and balloons. Without delegates and supporters massed at a convention site as in the past, prerecorded scenes of celebrations around the country flashed on the screen in the live telecast of the convention.

While Governors, Senators and other leaders represented their states in the roll call where they announced the votes from their states, Shah was selected to represent her state of Maryland.

Shah, 20, is the leader of the Biden campaign’s youth outreach for South Asians and was elected a delegate to support Biden in the primary, the intra-party election for selecting the party candidate.

The roll call came after he was endorsed by former Presidents Bill Clinton and Jimmy Carter and the daughter of President John Kennedy and her son.

Carter called Biden a man of “integrity”. Clinton, taking a dig at Trump calling him a president who spends his time watching television and being on social media, said that Biden would be a president who actually works and leads.

There was no drama this time before or during the roll call as at some previous conventions.

True to the leftist credentials of Sanders, he was formally nominated by Bob King, the former president of the auto workers union and radical House of Representatives member Alexandria Ocasio Cortes.

They took their duty matter-of-factly, with Cortes presenting him as a champion of the working class leading a mass movement to fight “the explosive inequalities” but making no criticism of Biden.

Unlike other candidates for Democratic Party nomination, Sanders stayed on the primary ballots and as a candidate at the convention to underline the support he received from a large, voluble segment of his party for his policies.

Biden, who had been receiving an outpouring of support at the convention from Monday and into Tuesday was nominated by Senator Chris Coons from his state and Representative Lis Blunt Rochester.

Biden’s wife Jill, an educator was the starred speaker of the day’s session. She said that Biden, whose family was broken by two tragedies — the death of his first wife and daughter in an auto accident, and later the death of an adult son — was made whole by him and he will similarly make the broken nation whole with love and understanding.

Powell accused Trump of coddling dictators and Kerry said that he had become the laughing stock of the world on his trips abroad and had pushed away allies.

Biden also received a show of support from Cindy McCain, the widow of former unsuccessful Republican presidential candidate John McCain, who had broken with Trump.

Trump earlier in the day went to Arizona to showcase the border wall that he has made a signature of his campaign.

He criticised the Democrats as wanting open borders and opposed to law and order.