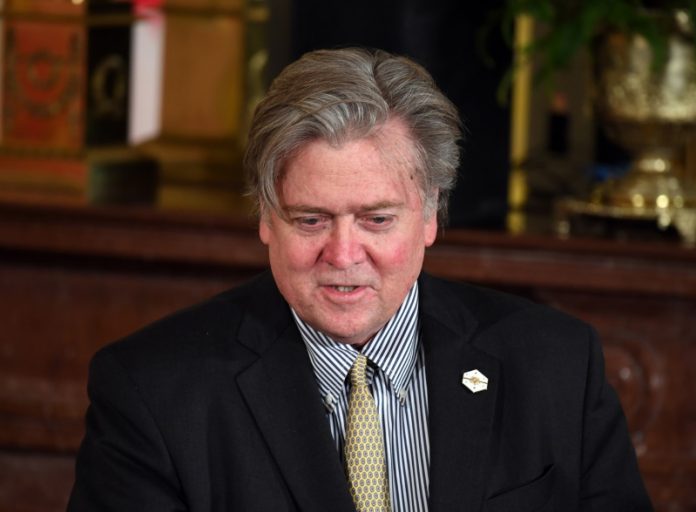 Steve Bannon, US President Donald Trump’s former campaign adviser, was charged with defrauding donors of hundreds of thousands of dollars over a fundraising campaign to build a wall on the country’s border with Mexico.

On Thursday, Bannon and three others, Brian Kolfage, Andrew Badolato, and Timothy Shea, were indicted for their roles in connection with the online crowdfunding campaign known as “We Build the Wall”, which raised more than $25 million, according to a statement from the US Attorney’s office in the Southern District of New York.

Bannon received more than $1 million, at least some of which he used to cover personal expenses, it alleged.

“As alleged, the defendants defrauded hundreds of thousands of donors, capitalizing on their interest in funding a border wall to raise millions of dollars, under the false pretence that all of that money would be spent on construction,” Xinhua news agency quoted US Attorney for the Southern District of New York Audrey Strauss as saying in the statement.

Bannon was arrested on Thursday morning on a 150-foot yacht called the Lady May in Connecticut by agents from the US Postal Inspection Service, which investigates fraud cases.

The yacht is owned by Chinese billionaire Guo Wengui, according to US media reports.

The other three defendants were also arrested on Thursday morning.

Later in a New York court, Bannon entered a not guilty plea.

Responding to his arrest, President Trump said he felt “very badly” about it, the BBC reported.

He also said he had had no involvement with “We Build the Wall”.

“I said, ‘This is for government; this isn’t for private people’ – and it sounded to me like showboating and I think I let my opinion be very strongly stated at the time,” he said.

Bannon, who has been released on bail, was a key architect of Trump’s 2016 presidential election victory.