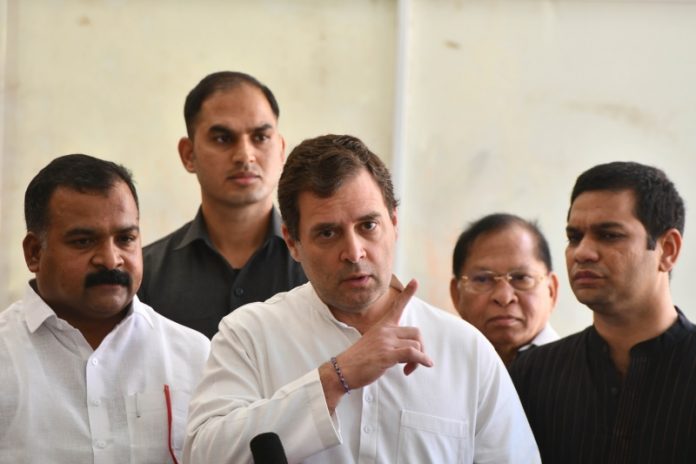 Delhi Congress in an emergency meeting of the state unit under the leadership of its president Chaudhary Anil Kumar passed a resolution demanding that Rahul Gandhi should be appointed as the president of the Congress without any further delay, to provide dynamic and youthful leadership to the party in these trying times.

The resolution noted that only a powerful and fearless leader like Rahul Gandhi can expose the “lies and falsehood” of the BJP and the Narendra Modi government.

The resolution also noted to make the people aware of the dangerous direction the country was going under the Modi government.

The emergency meeting was attended by several senior leaders of the party, including ex-MPs, ex-Ministers and ex-MLAs.

The resolution passed by the Delhi Congress also thanked Congress interim president Sonia Gandhi for inspiring the Congress cadres to work among the masses to solve their problems under testing circumstances, while the BJP government and its leaders kept a blind to the sufferings of the people, including lakhs of migrant workers who were left to fend for themselves.

The resolution, while acknowledging the freedom of speech, felt that some senior leaders going public with their statement regarding a change of leadership in the Congress was improper, as it not only gave ammunition to the opponents to criticise the party, but also demoralised the party cadres. The resolution noted that this was an issue that should have been raised in the internal forum of the party, instead of going public by leaking it to the media.

Sonia Gandhi was made the party interim President in August last year after Rahul Gandhi stepped down following the debacle in 2019 Lok Sabha elections.

The CWC meeting on Monday could be a stormy affair after a letter written by scores of party leaders has surfaced, calling for drastic changes and reform in the grand old party.

The party sources said that there is no challenge to the leadership of Rahul Gandhi but if the name of another person is pushed forward, there will be protests from others.

It’s anticipated that Rahul Gandhi may push the name of KC Venugopal, so everybody is gearing up with their strategies. But if the CWC decides for elections, the matter may be laid to rest. In the meantime, top Congress managers are busy reaching out to dissenters in the party.

However, after the letter surfaced calling for reform from top to bottom within the Congress, the pro-Gandhi family lobby has come out against the letter and lashed out at those behind it.

Punjab Chief Minister Amarinder Singh also rejected the letter, as he said in a statement that Sonia Gandhi should continue as party president. “What the Congress needs is a leadership that is acceptable not just to a few but to the entire party, through its rank and file, and the nation at large,” he said, adding that the Gandhis were the right fit for this role.