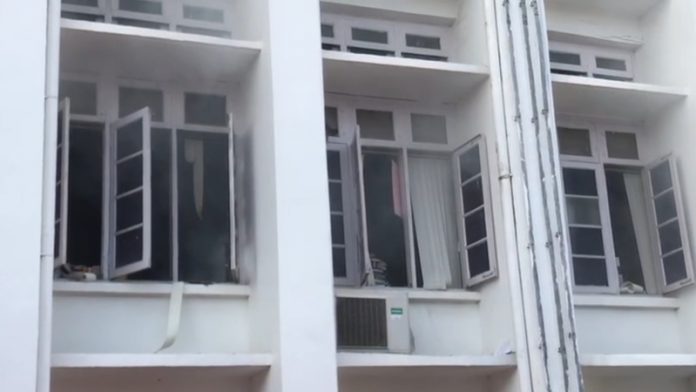 The Leader of Opposition in the Kerala Assembly, Ramesh Chennithala, has alleged that the fire that broke out in the state Secretariat on Tuesday is part of a larger conspiracy at the behest of Chief Minister Pinarayi Vijayan to destroy crucial evidence related to the gold smuggling case.

The fire broke out at around 4.30 p.m. at the general administration department (political) of the state Secretariat.

“The fire broke out in the GAD Political section and it’s under this department that all the files pertaining to foreign travel and political clearance are kept. None should forget that the NIA has asked for all the CCTV footages. This is a conspiracy with the knowledge of Vijayan to destroy all the evidence,” said Chennithala.

Meanwhile, state BJP President K. Surendran said that this is a very grave issue, alleging that the fire was created to destroy crucial evidence in the gold smuggling case.

“The fire broke out in the protocol office and we are told that this office was closed after a few people there turned Covid positive. This is a story being scripted. The Central agencies probing the gold smuggling case should look into this issue. Not long ago, the Chief Minister himself was speaking of lightning that took place and destroyed the CCTVs. All possible evidence in the case are being destroyed, at a time when the probe has reached Vijayan,” said Surendran.

However, Additional Secretary in the GAD, P. Honey, said that there were just two staff in the department.

“There were a few Covid positive cases in the department and hence just two people were there. The fire was spotted in a computer and short circuit is the reason for the fire. A few old files in the rack kept near the computer were damaged. The files that were damaged were old ones pertaining to room bookings of guest houses. No important files were destroyed and I say this with full responsibility,” said Honey.

As soon as the news of the fire broke out, Chief Secretary Vishwas Metha rushed to the spot and asked all media persons to leave the place, which was objected to by some political leaders.

“As soon as I came to know of the fire, I came and saw a huge crowd. As Chief Secretary, I will tell you that there is nothing to hide. Only after probe the matter will I know the extent of the damage. What happened was that everybody rushed to the place, including political leaders, and seeing this I came down and asked them to move out,” said Metha, adding, “We do not have any political agenda.”

Hearing the news of the fire, Surendran and others rushed to the Secretariat, but he and his followers were taken into custody by the police.

“A detailed probe should take place. The situation is so grave that even a legislator like me was not allowed entry. This is nothing but a cover-up and everything is being kept under wraps,” said Sivakumar.

The gold smuggling case was unearthed when P.S. Sarith, a former employee of the UAE Consulate here, was arrested by the Customs on July 5 when he was facilitating the smuggling of 30 kg gold in diplomatic baggage to Thiruvananthapuram from Dubai.

Things turned murkier when the name of Swapna Suresh, a former employee of the Consulate, and employed with the IT Department, surfaced and more so when her links with M. Sivasankar, the state’s most powerful official by virtue of the dual posts he held — Principal secretary to Vijayan and also the IT Secretary — came to light.

The IAS officer was subsequently removed from both the posts before being suspended by Vijayan.