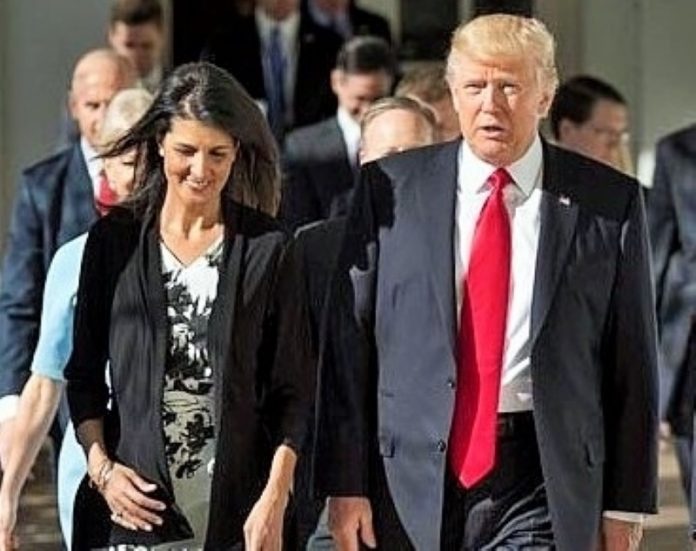 During the first night of the Republican National Convention (RNC), former US Ambassador to the UN and breakout Indian-American politician Nikki Haley urged citizens to re-elect President Donald Trump for four more years in the November polls and slammed the Democratic Party for making it “fashionable” to call America a “racist” country.

Haley’s prime time speech on Monday night comes a week after California Senator Kamala Harris made history becoming the first Black and Indian-American woman to be chosen for a major party’s presidential ticket.

Harris is the Democratic nominee for Vice President in the 2020 US election.

In a her speech, Haley, the former South Carolina Governor, said that “in much of the Democratic Party, it’s now fashionable to say that America is racist”.

She recounted how states like her native South Carolina have risen up from racist violence, saying: “America is not a racist country”.

Rebutting the idea that Trump is racist is among the core messages the President’s campaign is pushing on the RNC platform all week.

“America is not a racist country. This is personal for me. I am the proud daughter of Indian immigrants. My parents never gave in to grievance and hate. My father wore a turban. I was a brown girl in a black and white world,” Haley said, seeking to weave an upbeat immigration theme into the Trump re-election pitch.

“America is a story that is a work in progress.”

Haley took the audience back to the 2015 shooting of nine Bible study attendees by a white man at a historic Black church in Charleston.

Haley explained how South Carolina did not erupt into the kind of violence seen after recent brutality against African-Americans, notably George Floyd’s murder and most recently the shooting of Jacob Blake in Kenosha, Wisconsin, on Sunday.

As Haley spoke, protesters spilt into the streets in Kenosha, the nation’s latest flashpoint in summer of constant racial unrest.

Republicans are framing these protests as the kind of “chaos” that a Democratic win will unleash across America’s cities.

Haley is seen as one of the rising stars in the Republican Party, with a recent move back to South Carolina and a book that has sparked speculation about a 2024 run.

She said on Monday night that Trump and Vice President Mike Pence “have my support”.

In her address, she also tore into Democratic presidential candidate Joe Biden’s campaign plans, describing in detail what she called a “radical left” future fuelled by “anarchy”, “riots” and “cancel culture”.

Republicans opened the convention with grim warnings about America’s future if Trump doesn’t win a second term, casting him as a protector of religious freedom, the right to bear arms, independent thinking, freedom of speech and much more.

Taken together, both Harris and Haley’s presence at their parties’ convention speaks to the steady rise of Indian-Americans in US politics.

Already, talk of a Harris versus Haley match-up in 2024 has begun swirling.

Haley was the first Indian-American to serve in the US cabinet when Trump appointed her as the Permanent Representative to the UN.

A star of the Republican Party, she left the post at the end of 2018 and has been active in politics. There has been speculation about her running for president in 2024.

A poll by Leger earlier this month found that she ranked third as the choice of Republicans to be the party’s candidate in 2024 with 11 per cent support, behind Pence with 31 per cent and the President’s son, Donald Trump Jr, with 17 per cent.

Haley became the first woman and non-White to be elected Governor of South Carolina in 2010 and the second Indian-American to be elected to the office after fellow Republican Bobby Jindal of Louisiana.

His supporters are casting the 2020 election as a choice between the American values of freedom and what they cast as the “radical left” world of the Biden- Harris ticket.

The Republican convention runs through Thursday and includes a presidential speech from the White House South Lawn and a vice presidential address from Fort McHenry in Baltimore.