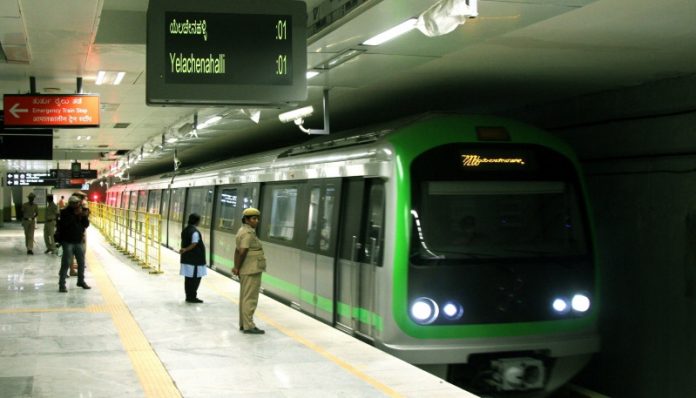 The state-run Bangalore Metro Rail Corporation Ltd (BMRCL) is ready to resume its services in the tech city amid Covid pandemic, an official said on Wednesday.

“We are waiting for the Central government’s clearance to resume operations on east-west and north-south routes in compliance with the standard operating procedures (SOPs) of the Union Ministry of Home Affairs and guidelines of the Union Health Ministry to ensure the safety of commuters,” the official told IANS.

Like other state-run transport firms, Namma Metro too suspended its services since March 25, when the lockdown was suddenly enforced and extended, forcing thousands of commuters to switch over to alternative modes of transport.

“Though limited bus, train and plane services were allowed to resume gradually during the three-phases of unlocking, regular express/mail passenger trains and metro rail services remained suspended to prevent crowding in public places and the virus spread,” said the official.

As the most popular transport mode for its punctual, efficient and cleaner service in air-conditioned coaches, the metro has been ferrying more than four lakh commuters on the twin routes, covering 42.3 km across 44 well-lit stations till pre-Covid days.

“As social distancing has to be maintained, the guidelines may limit the number of commuters to one-third of the capacity in a six-coach train, that in normal times carries nearly 1,000 people per trip,” the official observed.

To ensure the commuters are virus-free, they will be screened at the entrance and advised to keep wearing a mask throughout the journey for their safety and that of others.

“As most of the commuters use smartphones, they will be advised to download the ‘Aarogya Setu’ application (app) for contact tracing in the event of any of them getting infected by the virus,” the official added.

All commuters will be advised to use e-tickets in the form of a smart card for entry and exit from the metro stations to minimise contact with tokens.

“We are hoping the government to permit resuming metro services in a phased manner under the guidelines to ensure the safety of commuters and the staff as restrictions on inter-state and intra-state travel have been lifted across the country,” the official said.

As a joint venture between the state and Centre, the operator has incurred Rs 300 crore loss over the last five months due to the suspension of its services to contain the pandemic.

Rajasthan HC stops any action against Pilot camp till Tuesday