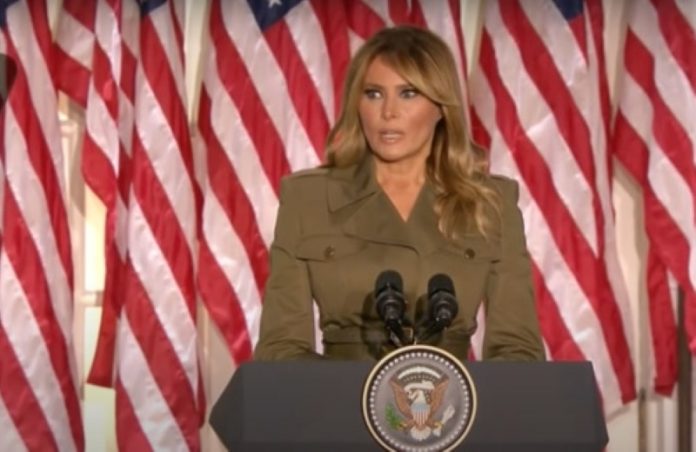 Under a clear night sky, with the sound of crickets for the company and an adoring crowd of Donald Trump acolytes in attendance, America’s First Lady Melania Trump starred on the second night of the Republican National Convention, appealing to the “incredible people who took a chance on the businessman who had never been in politics” to vote for her husband’s second term in the upcoming November election.

“He’s not a traditional politician. It is something I have always admired,” Melania said, seeking to frame Trump as the insurgent once again, that heady template which catapulted Trump to power in 2016.

Dressed in an olive green skirt-suit, almost military-inspired, Melania Trump was speaking Tuesday night from a renovated Rose Garden at the White House, a location choice that drew strong criticism from Republicans who have turned against Trump.

“The First Lady of the United States is delivering a political speech at the White House, the People’s House, behind the presidential seal. This is such a sad moment for our country,” The Lincoln Project tweeted.

“They are not monarchs, this is not their property! That’s not Barbie’s dream house, that’s the American people’s house!” MSNBC’s Joy Reid exclaimed.

Reading off a teleprompter and mixing the personal with the political, Melania drew on her “experiences” as First Lady, speaking of those who are fighting “extraordinary circumstances” whom she takes home with her each day “in my heart”.

Melania Trump spoke on a night that featured the president’s daughter Tiffany Trump and son Eric Trump — all pushing the Trump family’s carefully scripted storyline that mostly avoided mention of the more than 178,000 Americans dead from the coronavirus.

Melania Trump was the only speaker in the last 24 hours to express sympathy for the families of the dead. Oddly enough, just a handful of members who marked attendance at the Rose Garden were wearing masks.

“Donald will not rest until he has helped everyone who has been affected by this pandemic,” Melania Trump promised voters.

“Give them hell! Continue to be unapologetic!” Trump’s adult son egged his father on in a “personal” sign offline.

The First Lady stepped onto the Convention stage after many months away from the media glare. She steered clear of the flubs made during her 2016 convention speech which included large chunks similar to a Michelle Obama speech.

Melania Trump is only the second foreign-born first lady in US history. A native of Slovenia, she is Trump’s third wife and the couple have a son, Barron, now 14. Melania Trump became a US citizen in 2006, a year after she married Donald Trump.

Melania’s speech came after her husband showcased a naturalisation ritual with a group of five newly minted Americans from five countries, including India. Critics are calling this a “galling” political stunt.

Early reports from the Nielsen company show that the final hour of the opening night was watched by 15.8 million people across the top six television networks. For the Democrats, the corresponding number for the opening night last week was nearly 3 million more at 18.7 million.

Food grains for plastics, a new initiative of MCG