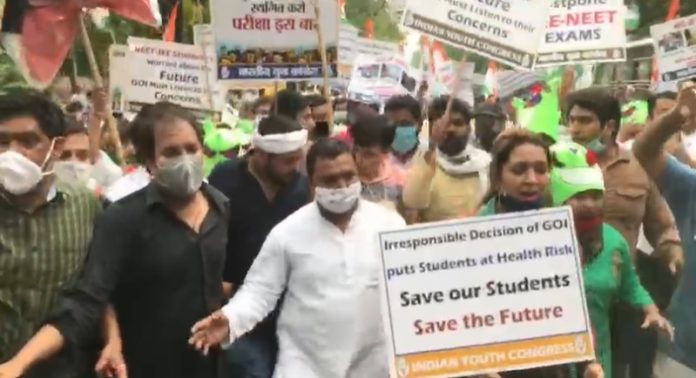 Upping the ante against the Centre, hundreds of Delhi Congress workers on Friday staged a protest outside the Ministry of Education demanding postponing NEET and JEE exams.

However, they were detained by the Delhi Police and taken to Mandir Marg police station. Former Congress President Rahul Gandhi took to Twitter and wrote, “NEET-JEE aspirants’ safety should not be compromised due to the failures of the government. The government must listen to all stakeholders and arrive at a consensus.”

Congress General Secretary Priyanka Gandhi Vadra also took to Twitter and wrote, “The govt cannot ignore the voices of the students appearing for NEET, JEE exams and those of their concerned parents. They are the future of our country. With the rising scale of the pandemic, is it fair to expose them to infection in this manner? At least some things should be beyond politics.”

In the morning Rahul Gandhi also appealed to the people to join the nationwide protest for students’ safety. “Unite your voice with lakhs of suffering students. Speak up for student safety from 10 a.m. onwards. Let’s make the government listen to the students,” he tweeted.

The Congress is protesting across the country demanding postponing of NEET, JEE exams scheduled in the month of September amid the novel coronavirus (Covid-19) pandemic. Meanwhile, NSUI workers are sitting on a protest outside Shastri Bhawan for the last three days demanding postponing the exams.

Congress General Secretary K.C. Venugopal visited the NSUI workers in solidarity. “Visited NSUI protest at Shastri Bhavan to show my solidarity. The BJP government must listen to the voice of students who are concerned about safety and transportation during Covid-19. The government must listen to them before making a decision on JEE and NEET exams,” Venugopal tweeted.