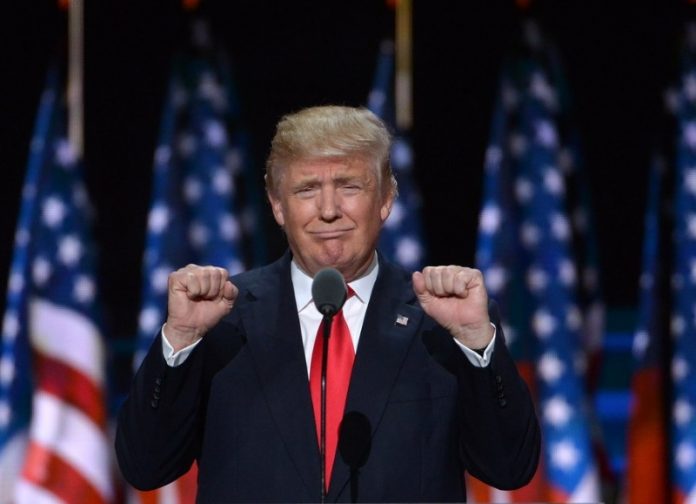 US President Donald Trump has officially accepted the Republican Party’s nomination for a second term in office.

His acceptance on Thursday night came during a speech from the White House South Lawn on the last day of the ongoing Republican National Convention (RNC), reports Xinhua news agency.

Taking the podium after his introduction by daughter and senior White House adviser Ivanka Trump, the President said: “I stand before you tonight honoured by your support, proud of the extraordinary progress we have made together over the last four incredible years, and brimming with confidence in the bright future we will build for America over the next four years.”

He opened his speech by remarking on hurricane Laura that devastated communities as it swept through Louisiana and Texas, CNN reported.

“We begin this evening, our thoughts are with the wonderful people who have just come through the wrath of hurricane Laura,” he said.

“We are working closely with state and local officials in Texas, Louisiana, Arkansas, Mississippi, sparing no effort to save lives.”

Trump praised law enforcement, local and state officials and the Federal Emergency Management Agency for their efforts to prepare for the storm.

The President said he will to visit the region this weekend.

Trump also took a moment to remember his late brother Robert, who died earlier this month in New York.

“I know my brother Robert is looking down on us right now from heaven,” the President said.

“He was a great brother and was very proud of the job we are all doing. Thank you. We love you, Robert.”

In his speech, Trump also mentioned new trade deals’ his decision to pull out of the Paris climate accord and the Iran nuclear deal’ and the decision to move the US embassy to Jerusalem, reports the BBC.

“I say very modestly I have done more for African-Americans than any President since Abraham Lincoln,” he said, adding that he has done more for the black community in four years as President than his Democratic rival Joe Biden has done in 47 years.

“And when I’m re-elected, the best is yet to come.”

The President also paid respect to medical professionals fighting the coronavirus pandemic with a standing ovation.

“We are grateful to be joined tonight by several of our incredible nurses and first responders. Please stand and accept our profound thanks and gratitude,” CNN quoted Trump as saying.

“As one nation, we mourn, we grieve and we hold in our hearts forever the lives that have been so tragically taken, so unnecessary. In their honour, we will unite and in their memory, we will overcome.”

Meanwhile, hundreds of protesters took to the streets of Washington D.C. to demonstrate against Trump.

Early Thursday evening, small groups gathered in the Black Lives Matter Plaza – a section of road outside the White House which was renamed by the city’s Democratic mayor earlier this year.

Just outside the walls of the White Hosue grounds, protesters were filmed chanting in support of the Black Lives Matter movement and waving anti-Trump signs.