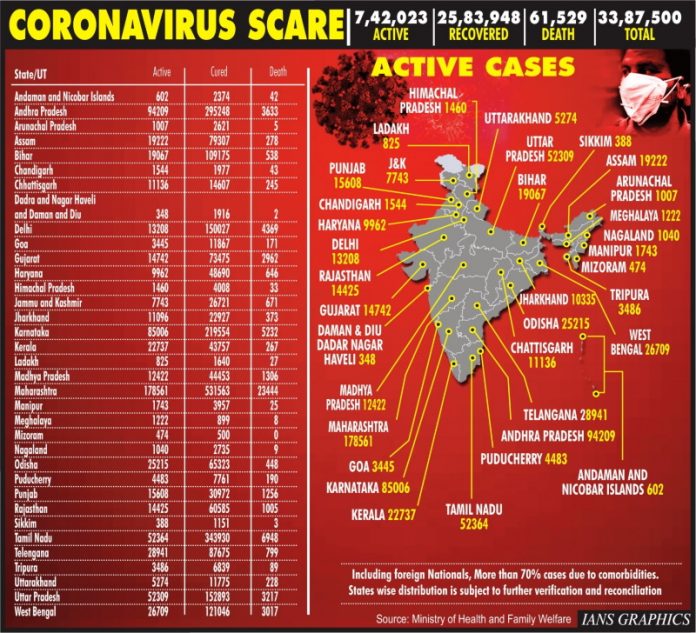 India on Friday breached its own previous day record of a single-day spike of over 75,000 cases, by registering an unprecedented 77,266 fresh coronavirus infections in 24 hours.

India though the third worst-hit at present, after the US and Brazil, has been reporting the highest number of daily coronavirus cases in the world for the last three weeks. No other country has reported such continued surge since the pandemic surfaced in China’s Wuhan city in December 2019.

India’s journey to over 33 lakh cases took precisely six months and 28 days since the emergence of the first case in the country on January 30.

On July 17, the country had logged 10 lakh cases, which then doubled in 20 days on August 7, and added another 10 lakh on August 23. It has now added almost 4 lakh cases in five days.

Recoveries have crossed the 25-lakh mark and surged to 25,83,948 with 60,177 more people recuperating in the past 24 hours, taking the recovery rate to 76.28 per cent. The actual caseload of the country is the active cases, which currently stands at 7,42,023. The silver lining is that the recoveries are over three times more than the active cases.

According to the Indian Council of Medical Research, a cumulative of 3,94,77,848 samples have been tested till August 25 with 9,01,338 samples being tested on Thursday.

The overall number of global coronavirus cases has topped 2 crore 43 lakh, while the deaths have increased to over 8,29,000, according to Johns Hopkins University.