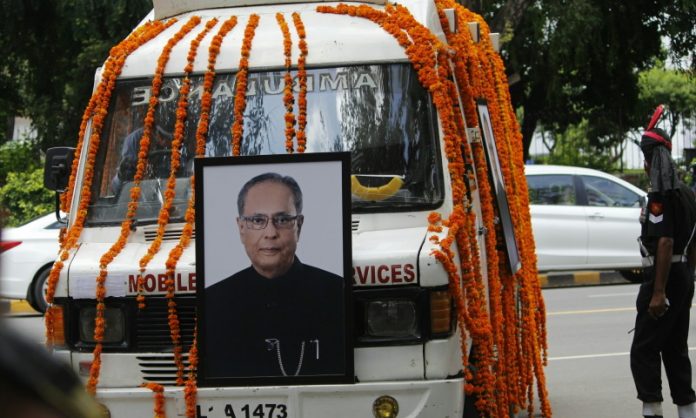 Former President Pranab Mukherjee, who passed away here at Army’s R& R Hospital during treatment on Monday at the age of 84, was cremated with full military honours on Tuesday afternoon at the Lodhi Road crematorium following a strict Covid-19 precautionary protocol.

His son Abhijit Mukherjee performed the final rites accompanied by a 21-gun military salute. Only close family members were allowed to enter the crematorium unlike previous cremation ceremonies of such dignitaries, and those handling the mortal remains of Mukherjee wore PPE kits.

Lok Sabha Speaker Om Birla, Defence Minister Rajnath Singh, Health Minister Harsh Vardhan and Chief of Defence Staff Bipin Rawat were among those who joined the rest of the nation in bidding adieu to the ‘People’s President’. Former Prime Minister Manmohan Singh, BJP President J.P. Nadda, Congress leaders Rahul Gandhi, Shashi Tharoor, Adhir Ranjan Chowdhury, CPI General Secretary D.Raja, Delhi Chief Minister Arvind Kejriwal, and many others paid homage to Mukherjee, who passed away on Monday evening after weeks in coma following a brain surgery. The mortal remains of the 13th President were brought to his residence from the Army Research and Referral Hospital, around 9.30 a.m.In keeping with the military tradition, the three service chiefs placed wreaths on Mukherjee’s body before politicians cutting across party lines paid their floral tributes.

The tricolour that was wrapped around Mukherjee’s body was removed and given to his family for the last rites. A man of unparalleled experience in governance, Mukherjee had gone into septic shock because of his lung infection and was hospitalised on August 10 in a critical condition. The veteran Parliamentarian served as the Union Foreign, Defence, Commerce and Finance Minister.

Born on December 11, 1935, in the small village of Mirati in Birbhum District of West Bengal, Mukherjee acquired a Master’s degree in History and Political Science as well as a degree in Law from the University of Kolkata. Mukherjee then embarked on his professional life as a college teacher and journalist.

Inspired by his father’s contribution to the Independence movement, Mukherjee embarked upon full-fledged public life following his election to the Rajya Sabha in 1969. He served as Deputy Minister, Industry; Shipping and Transport, Steel and Industry and Minister of State for Finance during 1973-75. He assumed office as the Finance Minister of India for the first time in 1982 and was Leader of the House in the Rajya Sabha from 1980 to 1985. He became Deputy Chairman of the Planning Commission from 1991 to 1996; concurrently Minister for Commerce from 1993 to 1995 and Minister of External Affairs from 1995 to 1996; Minister of Defence from 2004 to 2006. He again served as the Minister of External Affairs from 2006 to 2009 and Minister of Finance from 2009 to 2012. He was Leader of the House in the Lok Sabha from 2004 to 2012.

Mukherjee assumed office as the 13th President of India on July 25, 2012, and served his full five-year term till 2017. As President, Mukherjee lent dignity to the highest office and left an imprint with his scholarly and humanitarian outlook on national and international affairs.

A prolific reader, Mukherjee has authored several books on an eclectic variety of subjects including the Indian economy and nation-building. The many honours conferred upon him include the Best Parliamentarian Award in 1997, the Padma Vibhushan in 2008 and the Bharat Ratna, India’s highest civilian award, in 2019.

The government has announced a seven-day State mourning from August 31 to September 6 as a mark of respect to the leader. The tricolour is flying half-mast on all buildings throughout the country. There will be no official entertainment during these seven days.

US National Institutes of Health halts clinical trial of HCQ