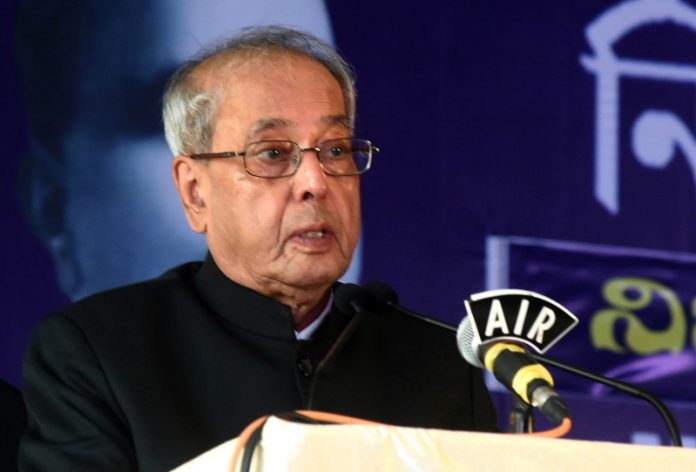 Never known to spend an idle moment during his five-decade journey in politics, during which he witnessed first-hand the evolution of a new India, Pranab Mukherjee, the country’s 13th President who died on Monday, had penned four volumes of his autobiography after his term ended in 2017, three of which have been published by Rupa, while the fourth is the process.

This is a rare first-hand account of the events that have shaped India in the past 50 years and will serve as valuable source material for academics, political scientists and the layman alike through the eyes of a man who never hesitated to call a spade a spade – and suffered the occasional pinpricks but eventually came out smiling.

A powerful orator and scholar, Mukherjee’s intellectual and political prowess as well as remarkable knowledge of international relations, financial affairs and parliamentary process are widely admired. He has been acclaimed for his role as a consensus builder on difficult national issues through his ability to forge unity amongst the diverse political parties that form part of India’s vibrant multi-party democracy.

Here, in descending order, is a brief description of the four volumes and key extracts from the first, second and third volumes:

* ‘The Dramatic Decade’ focuses on one of the most fascinating periods in Independent India’s history – the 1970s. This is when Mukherjee cut his teeth and plunged headlong into national politics. This is also when the Congress suffered significant losses – and control – of seven states after the 1967 General Elections but returned to power at the Centre for a fourth consecutive term.

India displayed her commitment to liberty by extending full support to East Pakistan’s struggle for independence in 1971. Given the heavy toll the war took on the economy, and the subsequent oil crisis of 1973, there was spiralling inflation and an acute shortage of goods and services; India had to act swiftly and decisively.

The Emergency was declared in 1975, to widespread criticism and social unrest. Finally, in 1977, India saw the advent of the politics of coalition, with the Janata Party coming to power. This was a turning point in the history of Independent India.

As one of the keenest observers of and participants in this stormy period, Mukherjee recounts brilliantly, and with a historian’s rigour and insight, the developments surrounding the birth of a new country – Bangladesh – and other landmark events of those years. Often candidly, he reveals his association with the key leaders of the decade, the rapport he shared with Indira Gandhi, and the tough decisions he chose to make in deference to his fierce sense of loyalty to the nation.

Offering a direct window into this tumultuous, yet critical, period in modern Indian history, “The Dramatic Decade” is the most authoritative insider’s account yet of Indian politics of the time, by a great politician and statesman.

“It is believed that Siddhartha Shankar Ray played an important role in the decision to declare the Emergency: it was his suggestion, and Indira Gandhi acted on it. In fact, Indira Gandhi told me subsequently that she was not even aware of the constitutional provisions allowing for the declaration of a state of Emergency on grounds of internal disturbance, particularly since a state of emergency had already been proclaimed as a consequence of the Indo-Pak conflict in 1971.”

“Janata Party leaders, aided by a section of the media, alleged that our party was spending money like water. One newspaper reported that, as a close confidante of Indira Gandhi, I was especially entrusted with the protection of the party’s cash chest. George Fernandes enacted a drama by going door-to-door to raise small collections. He was snapped by newspapers, bucket in hand, collecting donations from shopkeepers. The picture they tried to portray was that while the Janata Party was strapped for cash, Indira Gandhi’s party was flush with truckloads of it. All major Janata Party leaders, except the Prime Minister, visited the constituency and addressed meetings. But their collective strength was not enough to prevent Indira Gandhi’s re-entry into Parliament. She won the Lok Sabha seat of Chikmagalur by a margin of over 80,000 votes over her nearest rival.”

“I did not know JP. I met him only once in 1974 at the Gandhi Peace Foundation along with C.M. Stephen. Krishna Kant had organized this meeting. We talked about the Naxalite movement, and I was impressed by his personality and his genuine approach to this emotional and sensitive issue. I found him to be far above petty political games; he truly wanted to restore moral values in Indian politics and hence expected everyone, including those in the ruling party, to follow his advice. I have reason to believe that he was more than justified in having such expectations. He was a rare Indian politician who didn’t clamour for office or power in spite of having it within his reach; he was a man who could have succeeded Nehru as the second most popular man on the Indian political stage. How could such a man not see through the opportunism of the opposition parties?”

Mukherjee was witness to (and, sometimes, a participant in) the momentous events of the 1980s and the 1990s, a period that was indisputably the most turbulent in India’s post-Independence history. An insider, he sheds new light on every major political occurrence of the time – from Rajiv Gandhi’s ascendance as India’s Prime Minister to the emergence of P.V. Narasimha Rao as a leader of the nation; from Operation Blue Star to the Babri Masjid’s demolition.

Equally, Mukherjee is candid about each of the professional crises that marked this period of his career – the rumours that he wanted to elbow aside Rajiv Gandhi for the top post; the possible reasons for his ouster from Rajiv’s Cabinet and, later, the party; and the allegation that he aided and abetted the Left by not imposing President’s rule in West Bengal and Tripura in the late 1980s.

The second volume of Mukherjee’s autobiography is not only an honest account of his years in power (and in the wilderness), but also a cogent analysis of the political and social turning points of a key period in the evolution of modern India.

“Much later, in a heart-to-heart conversation with me in 1991, P.V. Narasimha Rao expressed the view that if I had not formed another party after my expulsion, perhaps my return to the Congress would have been faster. Rajiv would have brought me back, especially after Arun Nehru, V.P. Singh and others had deserted him.

“Looking back, I feel P.V. was correct. I could have avoided the RSC (Rashtriya Samajwadi Congress) fiasco. I should have had the wisdom to realize that I was (and am) not a mass leader. Those who left the Congress rarely succeeded. I could have been of some help to the Congress party and the government during those crucial years of 1986 and 1987 when everything seemed to go wrong for Rajiv. Alas, I returned to the party only in 1988—too late to make any significant difference to the Congress’ performance in the Lok Sabha elections of 1989.”

* “The Coalition Years” begins its journey in 1996 and explores the highs and lows that characterized sixteen years of one of the most tumultuous periods in the nation’s political history. It is an insightful account of the larger governance phenomenon in India – coalition politics – – as seen through the eyes of one of the chief architects of the post-Congress era of Indian politics.

From the inexplicable defeat of the Congress in the 1996 general elections and the rise of regional parties like the TDP and the TMC, to the compelling factors that forced the Congress to withdraw support to the I.K. Gujral government and the singular ability of Sonia Gandhi to forge an alliance with diverse political parties that enabled the Congress to lead the UPA I and II coalitions, Mukherjee was a keen observer and an active participant in the contemporary developments that reshaped the course of the country’s political, economic and social destiny.

Beyond the challenges, complications and compulsions of coalition governments, this volume is also a recollection of Mukherjee’s journey heading the key ministries of Defence, External Affairs and Finance, beginning from 2004. He recounts each of these events with candour – the path-breaking meeting with Henry Kissinger in 2004 that altered the course of the India–US strategic partnership, his timely advice to Bangladesh Army Chief, General Moeen Ahmed, in 2008 that led to the release of political prisoners there and the differing views with RBI Governor D. Subbarao on the structure of the FSDC (Financial Stability and Development Council).

The third volume of Mukherjee’s autobiography is a sharp and candid account of his years at the helm. It offers the most authoritative account of contemporary Indian politics by one of the tallest leaders and statesmen of our generation.

“In my opinion, Sharad Pawar, as the leader of the Opposition in the Lok Sabha, expected the party to request him, instead of Sonia Gandhi, to stake claim to form the government. After Sonia’s elevation as the Congress president, she consulted P. Shiv Shankar on all important issues rather than Sharad Pawar. This sense of alienation and disenchantment may have been responsible for his statements on Sonia’s foreign origin, and his subsequent exit from the party in 1999.”

“Following my active participation in the conclave, Sonia Gandhi started consulting me more frequently. A certain detachment which had earlier existed in our relationship gradually transformed into warmth and mutual respect. I believe that this detachment and her decision of not being aligned with anybody in particular is her greatest strength. It reflects another important dimension in India’s political history. Like other illustrious members of her family, Sonia has adopted a truly pan-India approach. Her ability to reach out to the masses and their acceptance of her as their leader was the single most important qualifying factor for her to become India’s prime minister. She could have acquired other essential qualities for this office after assuming power.

“Looking back, I can say that as the longest serving Congress president, Sonia’s positive contribution to strengthen the Congress party has not received due attention in the analysis of contemporary political observers.”

“Matters took a dramatic turn after the fall of the Babri Masjid. Sitaram Kesri created a scene, collapsing into tears and disrupting a Cabinet meeting at which I was present. I had to tell him, ‘There is no reason to be melodramatic. All of you were members of the Cabinet and some of you were members of the CCPA. All decisions were taken in the meetings of the Cabinet and CCPA. Responsibility is collective; the onus cannot only be on the Prime Minister or Home Minister.”

“Later, in a private meeting with P.V., I did not mince words. I burst out, ‘Was there no one who advised you of the dangers? Did you not understand the global repercussions of any damage to the Babri Masjid? At least now take concrete steps to quell communal tensions and assuage the feelings of Muslims through affirmative action’.”

* ‘The Presidential Years’ which is under process, will chronicle the journey of India’s head of state in exhaustive detail. This unique autobiographical account promises to give readers a bird’s eye view of the functioning of Rashtrapati Bhavan, the inside story of the issues that made headlines – from the imposition of President’s rule in Arunachal Pradesh to demonetisation and the surgical strikes, his relationship with Prime Minister Modi and the NDA government and the functioning of the legislature, the executive and the judiciary.