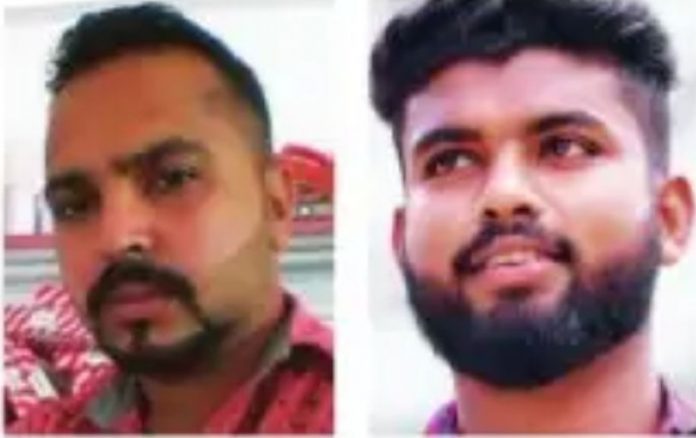 With the Kerala Police on Tuesday formally arresting four Congress workers and taking into custody another four alleged to be part of the conspiracy to eliminate two activists of the CPI-M’s youth wing, a war of words has broken out between the two parties. The Congress is demanding a CBI probe into the double murder.

The four were arrested on Monday and another four accused were being questioned on Tuesday.

The murders took place close to midnight on Sunday, when 24-year-old Haq Mohammed and 32-year-old Mithilaj, both youth wing activists of the CPI-M, were hacked to death by five people who came on bikes armed with swords and knives at Venjaramoodu, about 25 kms from the state capital’s suburbs.

According to the police, the arrested include Shejith, Ajith, Najeeb and Sathi, while two others — the prime accused Sajeev and Sanal — are yet to be arrested. Four more people have been picked up for questioning.

State Industries Minister E. P. Jayarajan, soon after visiting the homes of the victims alleged that the Congress MP from the locality Adoor Prakash knew everything about the incident.

“There are reports that have come out that after the brutal murder of the two young CPI-M party workers, the attackers got in touch with Prakash. This is a cold-blooded murder unleashed by the Congress party, who are out to wreck things. A detailed probe will have to be done,” said Jayarajan.

Reacting to this, Prakash said the onus was on Jayarajan to prove his allegation.

“I am ready to take up the challenge as I have done nothing in this. As the local MP, it’s my duty to get involved when our party workers are wrongly arrested by the police. Since Jayarajan has levelled this allegation about me, the onus is on him to prove it,” said Prakash.

Joining issue was State Congress president Mullapally Ramachandran who condemned the brutal murders and said they do not have faith in a probe by those who are close to Chief Minister Pinarayi Vijayan.

“CPI-M is a party which celebrates murder and they indulge in collecting party funds in the name of murder. We do not have faith in a probe by the police of Vijayan, instead, we demand a CBI probe, then only the truth will come out. The Congress party is not one which dabbles in violence and has always condemned any such acts. The Congress party has no role in this ghastly incident,” said Ramachandran.

Even though the FIR does not mention that these are political murders, the police pointed out that these two factions first clashed during the May 2019 Lok Sabha polls and since then, there has been an uneasy calm between them.

The top CPI-M leadership, including Chief Minister Pinarayi Vijayan, condemned the double murder and ordered a probe into it.

The incident occurred when the two deceased, who were travelling on a bike, were stopped and attacked by the five persons who came on two bikes. While Mithilaj died on the spot, Mohammed died in the hospital.

After the incident, angry CPI-M workers went around the area and are alleged to have damaged the Congress offices at several places in Thiruvananthapuram and Kollam districts.